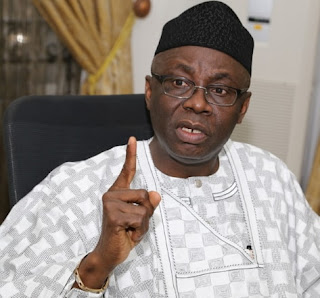 January 19, 2018 – Pastor Tunde Bakare’s Presidential Ambition: Why A Genuine Pastor Should Understand The Consequence Of Thus Saith The Lord

During the new year’s eve service at his church, the Serving Overseer of The Latter Rain Assembly, Pastor Tunde Bakare declared that God had instructed him to return to politics to lead the nation to prosperity.

“I heard the Lord say to me, politics is not over for you, there is still one thing left for you to do; run for president. And He said to me, I will work it out myself. I will make it happen in due course. Please trust me, I lie not in the Holy Ghost.”

This declaration by the fiery tele-evangelist has since generated a myriad of comments and speculative interpretations. While some applauded the move, others believe he must be living in a fool’s paradise. There are some who likened his declaration to dropping God’s name, advising him to differentiate his desire from vision.

Last Sunday, the pastor addressed the controversy saying his declaration has not indicated that he is running for any election.

“I’m indeed running but not for elections; it is a race of destiny and the destination is certain. The method by which God intend to do it is up to Him. I am neither flagging off an election campaign nor building political alliances.”

I am not an exponent of the touch-not-mine-anointed mantra as is presently interpreted and brandished. However, I am mindful of what I say to pastor’s “God says”. I believe it will be ignorant and arrogant of anyone to dispute him when you are not there when God was “talking” to him.

Secondly, I think a genuine pastor should understand the consequence of thus-saith-the-Lord, especially when God has not spoken.

Those around will remember the infamous “Bush will win” prediction on Frank Olize’s NTA Newsline in 1992.

As global attention focused on the impassioned US elections, NTA crew had visited Theophilus Olabayo to reveal to Nigerians who would win the November 3 election between incumbent Republican President George Bush and Democratic Governor Bill Clinton of Arkansas. Olabayo, the sought-after Prophet Elijah of the time is the founder and primate of the Evangelical Church of Yahweh Worldwide.

The confident and ebulient Olabayo had faced the camera and declared that Bush would win, convincingly. When the election results came out, not only did Clinton trounced Bush in the popular and electoral votes, he won in 32 states including Washington DC.

During the crossover service of his Adoration Ministry on the eve of 2015, Rev. Fr. Ejike Mbaka prophesised the end of Jonathan’s era.

In a message entitled “From Good Luck to Bad Luck”, the outspoken Catholic cleric told his congregation that God had directed him to inform them not to support Jonathan because “Goodluck Jonathan has become badluck”.

The rest, as they say, is now history.

Prophecy is time bound. So whether a prophecy is fake or genuine, time will prove.

Joseph was an important figure in the Bible. A young man with a tall dream, he had told his brethren that there would come a day when all would bow down before him. This dream got him into trouble and he was sold as a slave to Egypt.

He later became the Prime Minister of Egypt- a nation he was not even a citizen- and God used him to save the nation by carrying out the economic reforms needed to prevent the looming disasters.

This story emphasizes how God works in His own way, especially when He wants to intervene in a precarious situation like ours.

Pastor Bakare is eligible and competent to rule Nigeria and if God has chosen him to lead the nation to prosperity, I will be glad to pray for him. How a Moses emerge in a country that needs breakthrough should be less of our concern, especially when military and politicians have failed us.

The time has come for everyone of us to take interest in how this country is being governed. If the righteous and competent run away from politics, we will continued to be ruled by vagabonds and incompetents.

In politics, winning is not the only reason why people contest. If we want to increase political competition at all levels, competent people should be encouraged to consider contesting, rather than discouraging them.

That God has told Pastor Chris Okotie to contest and he has lost twice does not mean he has failed. It also does not mean that the prophesy was fake. When God asks you to run, it does not mean you will win the first time.

Joseph saw his dream at the age of seventeen but he did not become the Prime Minister until he was thirty. The thirteen year interval was there to try his faith in God and to prepare him for the job ahead. So, if God has indeed told anyone to contest, it does not matter the number of time he has contested, as long as s/he is still alive, the prophesy subsists.

For the vision is yet for an appointed time, but at the end it shall speak, and not lie: though it tarry, wait for it; because it will surely come, it will not tarry (Habakkuk 2:3).

Yes, we should pray for the country, but more importantly we must develop interest and take part in politics. It is not only your civic responsibility, it is spiritual. All our prayers and rantings on social media will achieve nothing except we have the righteous in power.

In about thirteen months, another general election will be held. We must participate and change any government that has not delivered on its promises. This is not the time to say your vote does not count. It is the little drops of water that make the mighty ocean.

It shall be well with Nigeria.