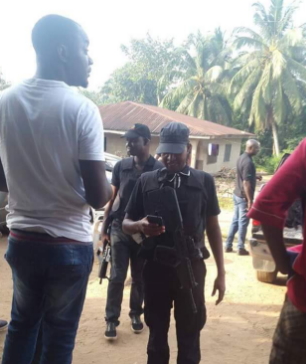 A Pastor with the Nigerian Baptist Conference in Ondo State, identified as Pastor Deji Joshua was reportedly killed in Okitipupa,Ondo State on Monday night by some suspected armed robbers.

The deceased was said to be pastor in charge of the Goodnews Baptist Church, Igbegunrin in Ilaje/Apoi Baptist Association of Ondo State Baptist Conference.

A source said the deceased was on his motorcycle when the suspected robbers attacked and killed him on Ode Aye road. They reportedly took away the motorcycle after the pastor was killed.

Police source said the incident occurred at about 11.30 pm, however the police command was yet to ascertain the real cause of these death of the clergy man.

When contacted, the Public Relations Officer of the State Police Command, Femi Joseph confirmed the incident and said the command had commenced investigation on the incident.

He said when his men heard about the incident, they moved to the scene and saw bullet wounds on his body,adding that they would conduct an autopsy to know the actual cause of his death.

The state chairman of the Christian Association of Nigeria (CAN) Revd. John Ayo Oladapo urged the security agencies in the state to fish out the killers of the deceased.