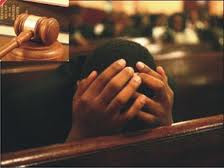 A Makurdi High court has sentenced a housewife, Mrs. Ternenge Terso to death by hanging for murder of her husband’s one year old son.

The child was from the husband’s second wife.

The convict, a 38 year old woman was said to have been married to her husband for seven years before the incidence and could not conceive, a development which made him to go and marry a second wife.

Not happy that the second wife immediately after marriage conceived and had a baby, the woman was said to have one day forcefully snatched the baby from the second wife’s nanny and strangled him to death.

The husband later reported her to the police in 2012 that she retrieved the baby from the nanny and strangled him to death.

When the case came up, she denied but was not showing any remorse. She testified for herself and called no witness to support her claim.

Meanwhile, prosecution called two witnesses including the Investigating Police Officer (IPO) who tendered a medical report of the autopsy carried out on the deceased baby at General Hospital, Vandeikya.

Delivering judgement , the Judge, Justice Jennifer Ijohor said evidence before her showed prosecution has proved the case beyond reasonable doubt that to warrant the conviction of the convict.

She advised barren women to look up to God instead of taking laws into their hands by engaging in nefarious acts.

The convict was later taken to the federal minimum prisons Makurdi where she is awaiting execution.