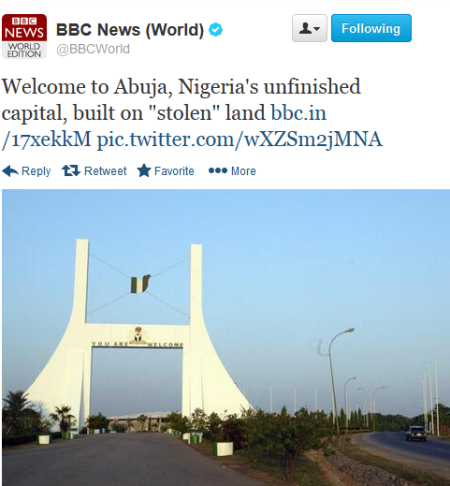 You must have come across this article on other sites. The most touching part of it is that the article was written by a complete stranger who perhaps got the wrong impression from history or local informants. 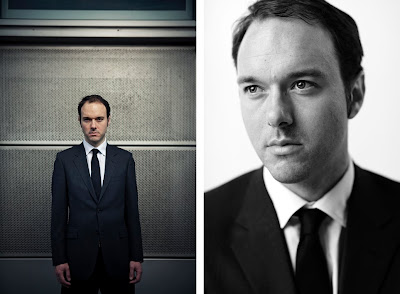 Whether it’s true or not, read a detail article written by Alex Preston for BBC News below:

When one of Nigeria’s long line of military rulers, General Olusegun Obasanjo, seized the land on which Abuja was to be built in the late 1970s, he could hardly have imagined that the city would remain unfinished 35 years on.

Abuja has a makeshift, haphazard feel to it: A place of bureaucrats and building sites, its streets eerily empty after the buzz of Lagos or the enterprising bustle of Kano.

The skyline is dominated by the space-rocket spires of the National Christian Centre and the golden dome of the National Mosque, facing each other pugnaciously across a busy highway at the city’s centre.

Its other striking landmark is the vast construction site of the Millennium Tower, which, if it is ever completed, will be Nigeria’s tallest building.

The skyscraper was intended to mark Abuja’s 20th birthday in 2011.

Now delayed until who-knows-when, hugely over-budget and the subject of numerous official investigations.
All the people of Abuja have to show for the billions invested in the project are two stunted fingers of scaffold-clad concrete.

I had been in Abuja for three days – about two-and-a-half too many – when my friend, Atta, a sociologist, picked me up from my hotel.

We drove out towards Aso Rock, the monolith looming over the presidential palace.
On either side of the road there are complexes of bulky, imposing mansions, most of them unfinished.

Some had empty swimming pools; others had mock-Tudor timbering, but were windowless and often roofless. Atta told me that 65% of the houses in these developments were uninhabited, put up only to launder Abuja’s dirty money.

Like the Millennium Tower, these grandiose schemes are ruins before they are completed, bleak monuments to a city built by kleptocratic politicians on stolen land.

We pulled off the Murtala Mohammed Highway at Mpape Junction, and immediately the road deteriorated.
“I am going to show you the real Abuja,” Atta told me, as his car struggled up a deeply-rutted dirt track.
A warm wind from the desert to the north – the Harmattan – whipped clouds of red dust around us as we climbed through rocky scrubland into the hills. 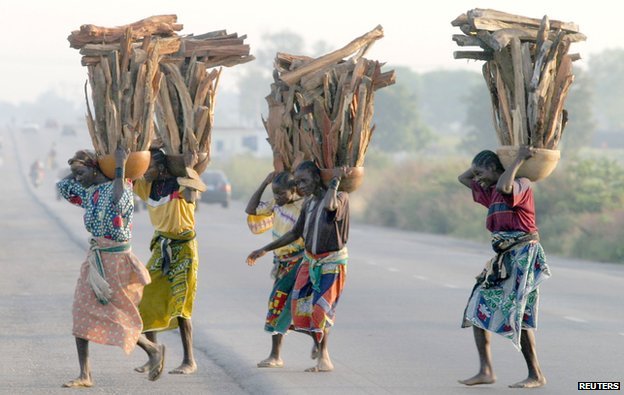 We entered a vast shanty-town of shacks with corrugated iron roofs, slums stacking to the horizon.
Nissan minivans scuttled past – they are called “One Chance” buses, as they barely stop on their manic journeys through these uncharted streets.

This was the home of the Gwari people, the original inhabitants of the land where the capital was built.
Hundreds of thousands of them were summarily evicted in the 1970s, and now scrape a living in the hills.

Abuja is itself a Gwari word and, although the city of generals and politicians below us had barely 700,000 inhabitants, two or three million people live in these shanty towns, many of them Gwari.

The Gwari people continue to fight for compensation for the land wrested from them by the Obasanjo government, land now worth more per square kilometre than almost anywhere else in Africa.

We got out and walked through the smoke and dust towards a row of shacks. In one of them, a woman knelt on the ground plucking a chicken, a man above her leaning on a makeshift bar.

Frank and Mary
They were Frank and Mary, Gwari people in their thirties, children of one of the thousands of families originally evicted during the foundation of Abuja.

The four of us sat in the shack sipping Fantas, staring out at the swarming life of the shanty town: Motorbikes and cattle and people, all of them through a veil of reddish dust.
“I trained as an architect,” Frank told me. “I have an education. But I do not have money, I don’t know the right people.

So I work here with my sister. In Abuja, money defines everything.” I ask him about the empty mansions lining the roads into the city.

“That is pseudo-Abuja, a false place. It’s unjust – we should be living in those houses. Instead…”
He gestured to the squalid lean-to that jutted from the back of the bar. Mary looked up from her chicken. “Life here is difficult,” she says.

“Often we can’t see across the street because of the smoke and dust. If it rains, you can’t move for the mud. But we pray hard.”

Frank pulled out a CD. It was Fela Kuti’s Suffering and Smiling. “This,” Frank said, as the music coiled out from an ancient hi-fi, “is the compressed statement of Nigerian society.

We suffer, but we smile. Nothing will change until we get angry, until we stop smiling.”
A storm was coming in, red clouds rolling overhead and thunder crackling down the valleys.

Frank and Mary stood waving to us, the music playing still, as we drove off down the hill, towards pseudo-Abuja.

“I Have Lost My Faith In Nigeria” – Ken Eneduwa
“Abuja Was Not Built On A Stolen Land, Your Claim About Nigeria Is Idiotic” – Nigerian Blasts BBC’s Alex Preston