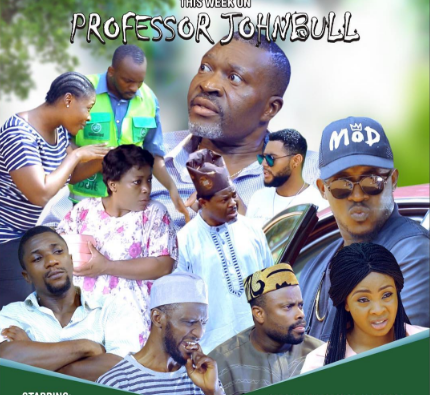 As today marks Valentine’s day, issues of love will come up in this week’s episode of popular drama series Professor Johnbull.

The Glo-sponsored humorously didactic series which will go on air at 8.30 p.m. on NTA Network, NTA International on DSTV Channel 251 and NTA on StarTimes preaches the message of selfless love to its viewers. According to Globacom, the Valentine episode is entitled Be My Val and it would be an exciting experience for millions of people for whom the programme has become a must-watch.

“The episode, as well as the new season of the sitcom, will as usual blend comedy with satire to highlight critical moral messages that will help in reshaping people’s attitude,” Globacom observed, adding that this week’s episode was specifically produced to key into the psyche of Valentine celebration which has become a global ritual.

“We have no doubt that the teeming fans of Professor Johnbull will find season 3 as exciting as ever. We are confident that each episode in this new season, like the episodes in the first two seasons, will thrill viewers superbly. We carefully selected the topics to be treated in this new season to continuously reflect our day to day living as a people. Be My Val, the first episode of the season is a clear testimony to this”, the company stated.

In the new episode, Professor Johnbull dissects the whole concept of Valentine’s day and the manner of its celebration. Among other issues, he examines the aspect of love and whether love should be celebrated only once a year? Should love be mutual, sacrificial or be based on what one can gain from the other party? What are the fortunes of the less privileged, the orphans and the abandoned ones on Valentine’s Day? Is Valentine’s Day a day to defraud people? What are the games ladies play on Valentine Day? Viewers will find answers to all these questions in the episode.

Professor Johnbull is exclusively sponsored by Globacom and produced by renowned Nollywood producer, Tchidi Chikere. It has Richard Mofe Damijo and Chief Chika Okpala, aka Zebrudayah, as consultants.

Continue Reading
You may also like...
Related Topics:air, professor johnbull