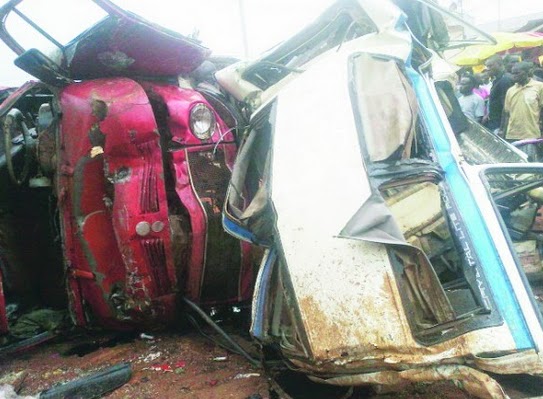 15 people were killed in a car accident that happened at Ewu hill along the Benin-Auchi Road when a truck crashed into an 18-seater Toyota Hiace passenger bus.

The accident was said to have occurred when the truck, loaded with a consignment of beer, reportedly had break failure and rammed into the commercial bus with Registration Number LFA 137 XB.

Only three passengers were said to have survived the crash. According to an eyewitness, the truck and the bus were heading in the same direction and were descending the hill towards Auchi when the accident occurred.

The eyewitness said it took the combined efforts of the men of the Federal Road Safety Corps (FRSC), the police and the Nigerian Security and Civil Defence Corps (NSCDC) to evacuate the survivors and the dead bodies from the mangled bus.

The incident was said to have caused a gridlock for several hours, as it took the security agents several hours to control the long queue of vehicles on both sides of the busy expressway.

Meanwhile, sympathisers at the scene have appealed to the relevant authorities to find lasting solution to frequent auto crashes on Ewu hill, saying many lives have been lost since the construction of the road in 1973.