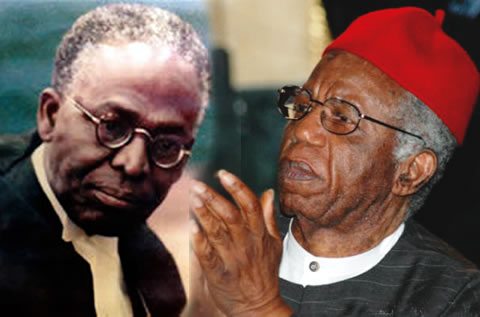 The Biafran war was fought over forty years ago (between 1967-70) but the reverberations continue to linger. Recently the literary icon Prof. Chinua Achebe whose book “Things Fall Apart” has reached almost every corner of the globe in more than fifty languages published his Biafran war memoirs entitled “There Was A Country: A Personal Narrative of Biafra” and controversy was immediately ignited by his narration concerning the late sage Obafemi Awolowo and the former Head of State Gen. Yakubu Gowon accusing both men of genocide against the Igbos.

As one of the greatest authors from Africa Achebe commands considerable following and influence around the world.

According to the popular author of ‘The Trouble With Nigeria’: “It is my impression that Awolowo was driven by an overriding ambition for power, for himself and for his Yoruba people. There is, on the surface at least, nothing wrong with those aspirations. However, Awolowo saw the dominant Igbos at the time as the obstacles to that goal, and when the opportunity arose – the Nigeria-Biafra war – his ambition drove him into a frenzy to go to every length to achieve his dreams. In the Biafran case it meant hatching up a diabolical policy to reduce the numbers of his enemies significantly through starvation — eliminating over two million people, mainly members of future generations.” Brutal frankness!

Biafra represented everything horrible and hell on earth! It was a desperate demonstrable acts of sheer evil unleashed on a proud people eager to obtain self-governance, something that can never be qualified as a crime. The spectacle of unmitigated shame of a war prosecuted with satanic gory relish, of human tragedy on a scale horrendously unimaginable; the emaciated, starved kwashiorkor-dehumanized kids and villagers in Igboland beamed to the outside world soon after the end of hostilities would forever remain indelible in the minds and memories of both victims and oppressors alike.

The powerful everlasting truth about Biafra and the ignoble roles played by both the then Col. Yakubu Gowon and the late sage Chief Obafemi Awolowo must be defended robustly and the old literary icon himself must also be defended from untrammeled attacks from scoundrels and ignoramuses out to make ‘name’ for themselves at his esteemed expense. The history of the Biafran genocide cannot be re-written but it ought to be told without fear or favour especially by those like Achebe who witnessed at close range.

According to retired Col. Achuzia, a participant in the war, Prof. Achebe was in order for saying what he said for that was the true picture of things. Arguing that he would reinforce what Achebe wrote in his Biafran memoir the old soldier maintained stiffly that the great man of literature living in America was factually right on the marble. Chief Awolowo himself had admitted initiating the heinous policy to check the ability of Biafran soldiers to continue fighting. So where lies the beef, the resentment toward Achebe?

Though one never saw nor witnessed the horrid war (having been born few years after its end) my late parents did tell me many stories about the war as witnesses. My elder brother who was a baby during the pogrom survived by the grace of God according to my late mother because sometimes they had to sleep in the bush to avoid roaming war planes and bombs! The one-storey building of my late uncle was bombed twice but the house is still standing today — thanks to the maintenance culture of his surviving children. Many young boys in our villages and neighbouring towns were either declared missing ever since or were massacred on the frontlines!

According to conservative estimates over three million Igbos perished in that horror of a war waged with extreme brutality and hatred of the audacity of a great ethnic group east of the Niger to assert itself, its identity, its uniqueness. But it bears stating here that like the Jews in Israel no force in this universe can ever succeed in exterminating the Igbos unless God Almighty so decides! Of course mistakes were made in 1967 and the late Ikemba Ojukwu shared in such callous mistakes blamed on youthful exuberance and martial courage very rare under the African sky at that epoch.

The truth sometimes hurts but it remains a healthy and liberating act! The late Chief Awolowo remains one of the greatest politicians Nigeria ever produced. Some even described him gloriously as the “best President Nigeria never had”! This commentator shares in that sentiment. But the criminal anti-Igbo role he played as the Minister of  Finance in Gowon’s government must be properly situated for history and posterity to benefit from those who should know better. Calling a spade a spade without fear or favour is what Achebe sought to do in his memoir.

Remi Oyeyemi, Femi Fani-Kayode and Ebenezer Babatope and others had all reacted angrily to the Achebe bombshell — calling him names and even exposing their aversion for full disclosure when the subject happens to be the great Awo. Their reactions pandered more to primitive tribal chauvinism and ethnic jingoism! While we refuse to dignify Oyeyemi with any serious attention (as regards the myopic diatribe he ‘spewed’ recently online) given the exposed fact that he is an intellectual lilliputian we must do justice to the two aforementioned ’eminent’ personalities who had come out ‘swinging’, yammering and casting aspersions on greatness which Chinua Achebe represents for generations.

So having ‘disqualified’ O(YEYE)mi from receiving any worthy mention and therefore removed from the picture on account of his pettiness we then ask concerning the two over-fed ‘Awoists’: Who are these people, Ebino Topsy and FFK by the way? And what have been their contributions to the advancement of humanity in general and Nigeria(ns) in particular? Well, permit me to say here with due respect that their various profiles are as empty as they are scandalous. In a land brimming with corruption and impunity (where shame has taken flight) any wonder that Babatope and Fani-Kayode could still see themselves as ‘heroes’ and ‘patriots’ who served their country well?

‘Amala’ and ‘Gbegiri’ soup politicians a la Lamidi Adedibu, political prostitutes of the first degree these phony Awoists have had to serve ‘masters’, dictators et al, Awo would have distanced himself from were he to be alive; for reasons bordering on political ideology and differences in perspectives the late sage would have not had anything to do with the so-called ‘leaders’ Babatope and Fani-Kayode served and through whom they enriched themselves. In Yorubaland political and economic leeches abound and their conscience is an object of merchandise!

Fani-Kayode’s sickening attempt to bulldoze his way back into public reckoning by sounding more Catholic than the Pope and more patriotic than Awo, Zik and Balewa combined must be deprecated here! A corrupt establishment man with roots in political prostitution Fani-Kayode was noted remarkably during his positions under the OBJ imperial presidency to be hyper-active doing every dirty job the Owu Chief threw his way (including insulting elders and those greater than him till eternity) and acting as Baba’s “attack lion” — apology to the present attack lion in Aso Rock Doyin Okupe!

Today, much like Nasir el-Rufai, former FCT Minister and today a social critic, Fani-Kayode is trying to rehabilitate himself in the public eye by intervening sometimes to the shame of his conscience. But the difference, it must be emphasized, between el-Rufai and FFK exists in the established fact that while the former is a tested vigorous and consumate intellectual the latter is just trying to impress sometimes exposing his limitations and hypocrisy. In him one finds a mocking attestation of how best to be a turncoat!

Prof Chinua Achebe is wholly right by telling the truth as it is! And one makes bold to defend him here for whatever it is worth. The late Awo is therefore ‘guilty’ as charged by a competent detribalised Nigerian with global worldview! Having achieved greatness Chinua Achebe can not be accused of courting controversy or pandering to local political or economic ‘warlordism’ in Nigeria like Dr Reuben Abati in order to gain popularity or recognition. To the best of our knowledge the old man of grace and charm is at peace with his conscience!

While held in high esteem in Yorubaland in particular and Nigeria in general for his great intellect, administrative capacity, and leadership prowess the late Obafemi Awolowo acted unstatesmanlike, sadistically and savagely against Biafrans; besides, he must never be equated with God who remains forever the only infallible immortal Being! For some Yorubas he may be a god but not God! Pa Awo was bound to make mistakes as a mortal and he made some while trying to assert his influence and leave footprints in the sand of time. His legacy cannot be complete without the mention of the millions of Igbos he and Gowon killed through the odious starvation policy he initiated remorselessly!

Chief Obafemi Awolowo loved his Yoruba ethnic group no doubt; he worked relentlessly to improve their lives but that regional love came with a huge prize against other regions’ interests. He operated, wittingly or otherwise, this masked policy of ‘my people first and foremost’ to the detriment of patriotism and pan-Nigerianism; he was an Oduduwa chauvinist, one who believed in the Oduduwa myth, whatever that meant to him!

There was indeed a country called and known as Biafra! And this country can still become a country post-Ojukwu when Nigeria (faced with her twisted unjust federal arrangements and mounting political and security challenges) implodes and Arewa and Oduduwa Republics rise out of the carcase of the bruised and battered giant with the feet of clay! Make no mistake about it, folks, the descent into depravity in our fatherland could lead us to our ‘promised lands’ with or without a Moses. Long live Mr ‘Things-Fall-Apart’!