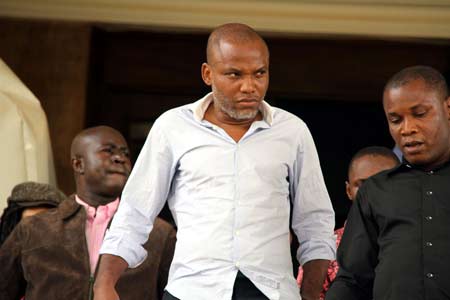 Giving ruling in the motion filed by Mr Mohammed Labaran, counsel to government, Justice Binta Nyako held that the application was meritorious.

She said the prayer to shield the names and addresses of the prosecution witnesses who were largely security operatives was not a bad idea, adding that the law supported it.

She further said: “let the public not misconstrue the stance of the court as a grant for a secret trial.

“The court shall be open for public, including accredited journalists and families of the defendants.”

The judge had barely finished her statement when Kanu bellowed from the dock:

“I won’t stand this travesty of Justice. Buhari spoke in public, he accused me in public. I must also be allowed to stand my trial in public.”

“This is nonsense! I will give testimony before this court! By the time I finish, there will be no Nigeria. This is no Sharia court. It is a court that operates under the common law.

“There will be no screening of witnesses, no fake identities or fake addresses. I cannot be tried in secret.

No! Nnamdi Kanu cannot be jailed in secret! They are mad. Why must I be tried in secrecy by a government that does not obey court orders.

It would be recalled that the applicant had applied for all the witnesses to be allowed to testify behind screen.

The prosecution also prayed that the identities of the witnesses should not to be revealed in any record of the proceedings.

The defendants had vehemently opposed the application, contending that granting such request would amount to gross violation of their rights to fair hearing.

The defendants were alleged to have conspired to broadcast on Radio Biafra, which is monitored in Enugu and its environs, on cessation plans.

They were alleged to have committed treasonable felony, an offence punishable under Section 41(C) of the Criminal Code Act, CAP C38 Laws of the Federation of Nigeria, among others.

His case has been adjourned until the 10th of January 2017.

Continue Reading
You may also like...
Related Topics:mazi nnamdi kanu wipes out nigeria