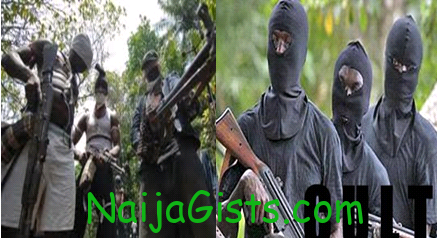 In the war, 2 suspected cultists nicknamed Wale Rewire and Moliki Ibadan were stabbed to death.

According to PUNCH Metro, 2 other occupants of the dilapidated house where they were killed, Michael Edem and Samuel Umeh, were also stabbed and shot but survived after policemen attached to Bariga Division came to their rescue. 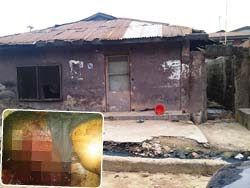 It was learnt that the killing was a reprisal for the murder of another cult member, Isiaka Oyefeso, who was allegedly killed by members of the Black Axe last Tuesday on Okesuna Street, Somolu.Our correspondent visited the house on Ebunoluwa Street, Bariga, where Ibadan and Rewire were killed. In the room, where the act took place, PUNCH Metro observed blood all over the walls and the bed ,as well as broken bottles. Residents told our correspondent that the assailants, who wore black shirts, were about 30 in number.

A resident, who declined identification because of his safety, said the victims were set up by a friend. He said, “One of the slain boys was a labourer who had been hired by the developer of the property where they were killed. He was the only one authorised to stay in that room, but four squatters were staying with him, bringing the total number of occupants to five.
“One of the occupants of the room came out at midnight to make a telephone call and then left.

A few minutes later, about 30 hoodlums wielding knives, cutlasses, guns and broken bottles stormed the room and descended on the occupants, leaving them for dead.
“It is believed that the fifth occupant of the room was the one that gave information to the cult members.”A police source told our correspondent that the incident occurred about 4am. The policeman said he rescued two of the victims and took them to a hospital.

He said, “About 3am, we received a distress call that some hoodlums were operating in Bariga but we could not locate the exact house on time because we were given the wrong address. Later, when we located the scene of the crime, which is in a dilapidated building, we observed that two persons had been killed.“However, two others were still breathing so we took them to a government hospital.”

It was learnt that the fifth occupant of the room, who was said to have tipped off the cultists, had been arrested.

A senior police officer attached to Bariga Division, told PUNCH Metro that the assailants were from Johnson, Somolu.

He identified the prime suspect as Elewure, a suspected cultist, who is on the police wanted list for murder and robbery. Elewure was also implicated in the vandalism of 100 vehicles in Bariga and Pedro area of Somolu in April.

When contacted on the telephone, the spokesperson for the state police command, Ngozi Braide, confirmed the incident.