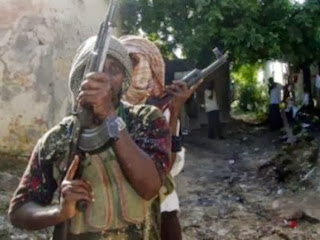 The Islamist insurgents also burnt scores of homes and buildings in the late Tuesday attack in the town of Benisheik. They set up checkpoints and gunned down motorists who tried to flee, according to multiple witness accounts.

“Eighty-seven bodies were recovered in the bush and our people are still searching for more,” Saidu Yakubu of the Environmental Protection Agency in northeastern Borno state told journalists.

He briefed reporters who accompanied Borno’s Governor Kashim Shettima to the scene of the massacre.

Details of the attack in the town which has been previously been targeted by Boko Haram first emerged Wednesday.

The phone network in Borno has been down since the middle of May when Nigeria imposed a state of emergency across much of the northeast amid a military offensive aimed at crushing Boko Haram’s four-year insurgency.

In another development, Unknown gunmen in army uniform struck in Gudu District of Abuja on Friday and killed eight people. 15 others were also reportedly injured in the attack.

The invasion by the gunmen, who purportedly dressed in Nigeria Army camouflage, has created panic in the Federal Capital Territory.

Residents of the area panic when it was apparent that the attack took place behind the Apo Legislative Quarters, which houses many Senators and members of the House of Representatives.

Eyewitnesses said the incident occurred  occurred around 3.00am in an uncompleted building owned by an army general.

The building was being occupied illegally by truck pushers, scavengers and   water vendors known as ‘mai ruwa.’

According to eyewitnesses, the gunmen overwhelmed Sabo Barkin Zuwo Street at about 12am.

NE could not authoritatively confirm if the people who carried out the shooting are Nigerian soldiers but An insider who pleaded anonymity said that the dastardly act might have been carried out by the owner of the building. Also, the name of the Army General could not be ascertain as at the time of this report.

Meanwhile the scene of the incident has been condoned off  by the men of State Security Service (SSS), soldiers and police.

The police public relations officer in Abuja, DSP  Altine Daniel, told SaharaReporters confirmed the shooting but said they have no further information information about those responsible for the killings, stating that investigations has begun on the matter.

Soldiers, policemen, operatives of the State Security Service (SSS) and rescue agencies had been drafted to the scene as at press time.