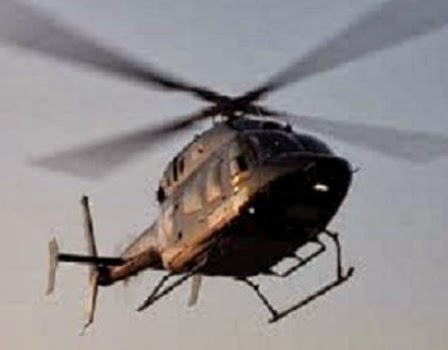 More than Three Nigerian dailies have reported on the apparent use of helicopters by terrorists operating in the burning north of Nigeria. A March 18th article in Tribune , a March 23rd article in THISDAY, a March 21st DailyTrust report of a Senate hearing in which Senator Abu Ibrahim detailed the use of helicopters to drop supplies and attackers to attack Katsina; and another March 25th investigative report in DailyTrust all presented shocking details of how helicopters have allegedly been used to ferry terrorists and ammunitions in the recent terror incidents in the north, the attack on 21 Armoured Brigade, Giwa barracks precisely and the massacres in Katsina.

In these cases, helicopters are described to have been seen by locals hovering above prior to the attacks and dropping materials and reinforcements in thick forests. DailyTrust queried Nigeria’s Airspace Management Agency, NAMA, about the possibility of such unnoticed air flight, despite the acquirement of 60 million Euros worth of modern equipment by the agency, its Terminal radar Approach Control of Nigeria (TRACON) which has enabled it completely cover the Nigerian air space. According to aviation experts, it is basically impossible for unknown choppers to fly in Nigerian air spaces without being detected by government radars; this raises serious questions.

Is NAMA inefficient or are the terrorists flying below the radar?

Is the use of helicopters by Boko Haram and the gunmen who raised Kaduna and Katsina villages, killing over 100 civilians in both cases related and operated under the same command?

Is there top level government involvement in the terror operations decimating the north which is permitting such utility of choppers in Nigerian airspaces to ferry terrorist and terror ammunition?

Are the choppers able to fly ‘undetected’ because they are craft of the Nigerian military which has been possibly sabotaged and has elements participating in grand terror against the nation?

Nigeria’s north from Benue to Borno, which spans approximately 80% of Nigeria’s land mass has been wrought by unabating terror for the better part of the last five years since the beginning of the Jonathan administration. The terrorists appear to be gaining in sophistication and becoming more deadly as time progresses.

The unhindered attacks in the northeast are beginning to be reproduced in ferocity and style in the middle belt and other parts of the north as gunmen drive or ride in, fire all in sight and burn down the entire village or town in a seeming deliberate attempt to depopulate and exterminate these regions. There are many questions to be asked as pertains to the ease of operations, the seeming inability of Nigeria’s security to prevent and disrupt attacks, the enforcement not even being able to apprehend attackers after operations that last hours.

Is it paranoid to ask if there is a ploy to depopulate and destroy the north? If so, by whom and hat level of Nigeria’s security department is involved? A past Nigerian head of security, NSA, General Owoye Azazi had alerted in 2012 before he was killed in a copter crash that the sudden sophistication of Boko Haram was not ordinary but was sponsored by elements in the nation’s ruling party.

The Governor of Adamawa state, a seasoned army veteran, Vice Admiral Murtala Nyako, who understands the dynamics of war, has repeatedly perplexedly insisted that there are agents behind the terror in the north within the Office of National Security, ONSA. Most recently in a speech he gave in the United States [See SaharaReporters of March 24th, 2014] he asked, “…is the massive killing of people and destruction of property and the environment state-sponsored?”

The Governor further said, “The security situation we are … facing in Northern Nigeria today could be sponsored, financed and supported by evil minded and over-ambitious leaders of Government and the society for political gains. There is simply no person(s) in the North-Eastern zone rich enough to foot the financial and logistic bills on Boko Haram activities. Somebody outside the zone must have bought these arms, ammunitions and explosives somewhere which is easily traceable, paid the freight charges to Nigeria, cleared them at the Ports, conveyed them up-country through numerous check-points and put them in safe-houses in the States ready to be used by the appointed killers.”

Recently, a Turkish Airline senior executive confessed to being involved in dropping ammunitions for terror groups in Nigeria through the Kano airport. Does this report gain credibility based on the stupefying ability of ‘Boko Haram’ and affiliated terror operatives to gain sophistication and operate with impunity under this administration? Top level government collaboration with the terrorists will support the ‘confessions’ of the Turkish executive and will also explain the ability of choppers to fly undetected in the northern skies among other patterns of unprecedented and unexplainable successes of those terrorizing the north.

One has to question the position of Nigeria’s ONSA and Presidency in all these matters. Does President Jonathan who hails from Nigeria’s South and whose statements and body-language have demonstrated a disconnect from the north and the travails of that region, have the commitment and capacity to rescue this troubled region from the grips of marauders and ‘Boko Haram’ terrorists? Does his NSA, a dictator Babangida boy, Sambo Dasuki have the dedication, the mettle and most importantly, the desire to restore peace to this troubled region of the nation? Who is interested in decimating northern Nigeria?

There is an emergency situation in north Nigeria. This part of the country urgently needs committed and strong leadership. A dedicated and patriotic army man like ex-NSA Sarki Mukhtar from late Yar’Adua’s regime needs to be employed as a parallel Minister-of defense/NSA to oversee the engagements of the army in the north of Nigeria. Those in Abuja have failed for five years to check the situation which is now getting dangerously worse. The NATO upset of Libya has released arms, military craft and even mercenaries which terrorists and devilish politicians easily acquire with Nigeria’s ‘missing’ billions.
This administration is not tackling the issues of the north. A change in central government for one that can and will restore hope to that region as well as troubled regions across the entire nation, north to south does not seem to be happening any time soon. Pointing fingers to who is to blame for the administration’s failure will not protect life. The National conference in Abuja, apart from not being reassuring as presently constituted and under its present management, is too slow a process. A full war has been waged against the north and the north needs its regional determination and posturing to battle this war. Whatever region wishes to keep this President can do so. The people in the north are under attack from land and the air and need something to happen and to happen fast.