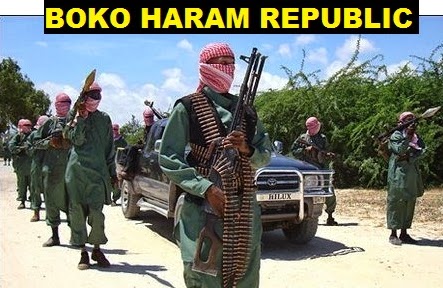 The latest figures from victims counting deaths in Bama since Boko Haram occupation in records at Tashama Bama in Maiduguri, the Bama escapees rally point, is 4,333 killed by Boko Haram. The count is made from new numbers updated when people escape to Maiduguri, the capital of Borno from occupied Bama. Boko Haram conquered Bama the first week of September this year.

Fleeing residents describe summarily executions at whim of Boko Haram of the governed citizens. Bama at the epicenter of the genocide is the second largest city in Borno state and has a population according to the 2006 census of 269,986, currently estimated at about 700,000.

The Nigerian government and its military forces have failed to rescue occupied cities under Boko Haram but have rather declared a cessation of fire against the terrorists who continue their campaign of calumny.

According to a top military source, most of the recent claims by the Nigerian military prior to the “ceasefire” of reclaiming some territory from Boko Haram were false. The source said that the only effort the military engaged in was the defense of Boko Haram’s advance to Maiduguri by blocking them at Konduga.

We were informed that 4500 Nigerian troops were sent scampering by a mere 300 Boko Haram terrorists at Mitchika before they overthrew Mubi. The Boko Haram terrorists have been telling the people in Mubi that the Nigerian government buys and supplies them the arms and ammunition they are using to conduct this pogrom.

I wonder what is the use of continuing to write about this stuff. As I am receiving this report from a Bama resident whose family members have been killed in recent weeks, I cannot control my emotions. The Jonathan government has abandoned these people. Hundreds of thousands are displaced; hundreds of thousands are slaves in their own with mother’s children being slaughtered and shot point blank.

No one cares about the plight of the people. The civilians are ready to fight for their towns but the Nigerian government has de-armed them and left them as sitting ducks to be slaughtered. The ceasefire claim is a mere political sham against the February 2015 Presidential elections. The Governor of Borno lacks the mettle and wherewithal to rescue the situation and is not making the appropriate clamor and demanding the proper attention to the crisis plaguing innocent citizens. More deaths are reported in Gwoza than the numbers above for Bama. Tens of thousands are being slaughtered freely in this pogrom.

To insult Nigeria, Boko Haram ensured they planted their flag on the house of Nigeria’s Defense Chief, Air Chief Marshal Alex Sabundu Badeh, in his village of Vintim.

The terrorists have promised to overrun Yobe state next; and they will.

Nigeria is in a state of war and the President simply does not care. Does anyone care?

[About the author: Dr. Peregrino Brimah;ENDS]