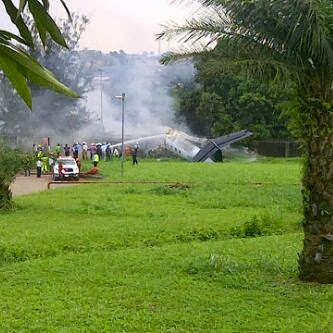 A team of officials from Nigeria’s avi­ation regulatory agency, the Nigeri­an Civil Aviation Authority (NCAA) and the Accident, Investigation and Preven­tion Bureau (AIPB) has been dispatched to Niger Republic to probe the cause of an air crash involving IRS Airline, an indigenous carrier. A statement by Yakubu Dati, spokesperson for aviation sector parastat­als yesterday read in part: “The Supervising Minis­ter of Aviation, Dr Samuel Ortom, has ordered the Accident Investigation and Prevention Bureau (AIPB) and other relevant agencies to investigate the circum­stances surrounding the accident.” A Folker 100 be­longing to IRS Airlines, a Nigerian aviation company owned by Alhaji Ishiaku Rabiu, at about 7:30pm on Saturday, lost contact at Ganla and crashed in Niger Republic.

The aircraft marked 5N-SIK and returning from a C-Check was said to be heading for Lagos when it crashed few minutes be­fore entering the Nigerian airspace.

Two crew members on board however survived. But it was gathered that while international civil aviation acceptable stan­dards permit only the coun­try in which the accident occurred to carry out in­vestigations, the Nigerian Government is interested in being a party to the investi­gation, due to recent terror threats to the country and that Niger, a neighbour­ing country, is said to be a major training and hideout zone for such terror groups.

Nigeria’s Commissioner for AIB, Dr Felix Abali, told journalists that aviation authorities had dispatched accident investigators to Niger Republic for accredi­tation to cater for Nigeria’s interest. Abali expressed the readiness of Nigeria’s AIB to undertake the task of investigating the cause of the accident if invited by the Nigerien Aviation authority.

“We have the capacity and means to conduct the investigation if so invited,” said Abali.

He stated that AIB was the only independent ac­cident investigation body with flight laboratory in the sub region and was staffed with highly trained aircraft accident investigators.

Here is a twist to the story:

Due to the recent Boko Haram threat, do you think NAMA took down the plane?