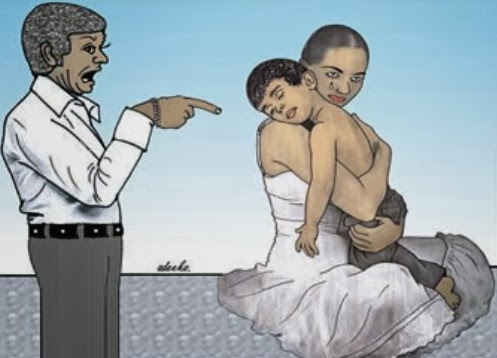 Feb 17, 2014 – Born Again Wife Confesses Past Adultery To Husband “Our 4th Child Is Not Yours”

The confession of a mother of five that her former boss was the biological father of her fourth child is now threatening her 25-year-old marriage. Her husband, 57-year-old Isaac Jemibola, a civil servant, has approached an Ikole Customary Court in Ekiti State, seeking the dissolution of his marriage to the woman, 48-year-old Olayemi.

Jemibola based his divorce plea on the ground that the respondent confessed committing adultery in 2002.

He urged the court in the petition filed on January 21, to grant him custody of the five children from the marriage.

The petition told the court that he married Olayemi in 1989 according to the native law and custom.
According to him, “after retiring to bed on January 19, my wife came to me and knelt down.

“She confessed to have had an extramarital affair with her former boss which resulted in the pregnancy of the fourth child.

“My wife said she had given her life to Christ and that her desire to make heaven made her confess based on the advice from her pastor.

“She added that the paternity of the fourth child was in doubt since both the boss and I slept with her the same week,’’ he said.

Jemibola further told the court that he reported the matter to his parents who pleaded with the woman to reverse her confession.

“She however insisted that she was following the dictates of the Bible.

Olayemi admitted committing the offence, but kicked against dissolution of the marriage.

“I did it because Jemibola was befriending another woman during the period which made him abandon me for almost six months.

“It was that same period that my former boss, who normally took me to work in his car, made love advances at me. Both men made love with me at almost the same period.

“After some years, I discovered that the child looked quite different from his siblings and out of guilt, I decided to tell him the truth.

“I pleaded for his forgiveness but he refused,’’ Olayemi said.

In her ruling, the court president, Mrs Yemisi Ojo, said: “In the interest of justice and in the spirit of promoting reconciliation between the two parties, the case will be adjourned till April 7 for report of settlement.’’