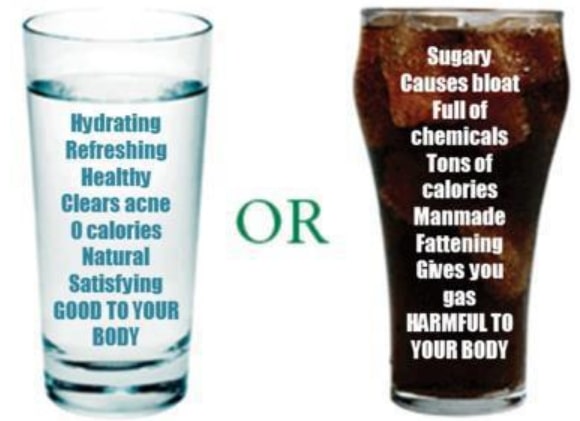 “When you react, you let other control you. When you respond, you are in control”- Bohdi Sanders

Viktor E. Frankl once said, “Between stimulus and response there is a space. In that space is our power to choose our response. In our response lies our growth and our freedom.”

Do not get upset with people or situations, both are powerless without your reaction! Have you ever shook a bottle of water and a bottle of soda before? If you’ve not, I will advise you to give it a try. No matter how long and vigorous you shake a bottle of water, when you open it up, it will still be calm, crystal clear, stable and covered with a layer of serenity.

This is different from a bottle of soda, because by the time you open it up, the gush will be so violent that you would have lost half of the content! A metaphor between these two states and our personal reactions to everyday situations is exemplified. How do you react? How do you choose to be? When shaken by those around you, when your spirit is ruffled, when everything seems to be going wrong, are you a bottle of water or a bottle of soda?

This somehow infer that we lose ourselves in the time that we try reacting to people’s provocation, insults and drama! I have realized that the smarter you get in life, the less you react to people and situations. Just like what happens to a bottle of water and Soda shaken vigorously, people can be categorized under this analogy. We are living in a world where situations and stimuli will want to provoke us into responding in manners that are not in tandem with our values and personality.

The bottle is you. What’s inside is your emotions/reactions. The outside world, situations and people will rattle and shake you from time to time.  Don’t let other people and their drama disrupt your inner peace. I’m not saying bottle up your emotions and keep them hidden. Expressing your emotions is key; it just matters in what form you do it in. Don’t react. Respond instead. Exercising some forethought into what you’re about to say and do can make all the difference.

The founder of one of Europe’s largest churches, Sunday Adelaja said, “A principled man is he whose response to life is outstanding”.

Mature people have come to master the art of inner peace, calm and thoughtful responses. You’ll never have control over other people’s decisions, or what cards life deals you. Your power lies in the choosing of your response. That is the one thing you can control. There are seven critical approaches that will help you master and manage your responses regardless of how awkward the external interferences are. They are:

#1 DON’T TREAT PEOPLE AS BAD AS THEY ARE, TREAT THEM AS GOOD AS YOU ARE:

How you treat people should not be a function of who they are but a function of who you are. Treat everyone with kindness and respect, even those who are rude to you-not because they are nice, but because you are. Mature people don’t seek revenge, rather they seek to understand the other person. It is the weak, immature people who seek revenge. The strong, smart and mature people will always try to understand the other person, forgive, and move forward instead of hurting them back. Revenge is never the answer. Nobody heals himself or herself by wounding another. Apparently, when you treat people like they treat you, they get upset!

#2 IT IS NOT EVERYTHING THAT DESERVES YOUR ATTENTION AND REACTIONS:

When you know where you are going in life, you will overlook many things. It is not everything and everybody that deserves your reaction. Your attention matters! You need not react to every opinion, every comment, or every situation. Be disciplined about what you respond and react to. Choose your battles wisely, not everyone or everything deserves your time, energy and attention.

#3 DON’T ARGUE WITH PEOPLE WHO ARE COMMITTED TO MISUNDERSTANDING YOU:

No matter how you try to explain yourself to some people, they don’t have the capacity to understand you. Stop giving too much explanation to people that have already made up their mind concerning you. Someone once said, “Self-care is also not arguing with people who are committed to misunderstanding you.” Don’t allow other people to ruin your happiness just because they can’t find their own. Stop reacting to every fuming arguments.

#4 DON’T REACT TO PEOPLE’S DISAPPOINTMENT, WORK ON YOUR OWN EXPECTATION:

Don’t blame people for disappointing you, blame yourself for expecting too much from them. Bill Lemley once said, “When nobody around you seems to measure up, it’s time to check your yardstick”. In order to live a productive and fulfilling life, we must progressively abandon unrealistic expectations. Expectations are meant to stretch and not break us. It is good to have high expectation of others, but it must be complementarily healthy or else it becomes toxic. Unhealthy expectation strains relationships and makes others look as if they are incapable.

#5 REDUCE YOUR ATTACHMENT TO OTHER PEOPLE’S OPINION OF YOU:

I have observed that the greatest hindrance to living a fulfilling life is being ‘stucked’ on other people’s opinion and acceptance. Someone’s opinion of you does not have to become your reality. You can’t change how people treat or what they say about you. All you can do is change how you react to it. You cannot control someone else’s behavior, you can only control your reaction. Lecrae Moore said, “If you live for people’s acceptance, you’ll die from their rejection.”

#6 THE LESS YOU RESPOND TO NEGATIVE PEOPLE, THE MORE PEACEFUL YOUR LIFE WILL BECOME:

#7 BE PROACTIVE, DON’T BE REACTIVE:

In his best-selling book, “The 7 Habits of Highly Effective People”, Stephen R. Covey emphasized the importance of being proactive as one of the most effective habits of highly effective people. Being proactive is about taking responsibility for your life. Proactive people recognize that they are “response-able.”

All of us encounter experiences in life when we may be temporally overwhelmed by a negative emotion, be it anger, pressure, nervousness, despair, or confusion. In these situations, how we choose to “master the moment” can make the difference between proactive versus reactive, confident versus insecurity, and success versus failure. We need to be proactive instead of being reactive, and to mitigate the feeling of obligation or pressure, so as not to allow ourselves to become bothered by what lies ahead.

Unfollow anyone on social media and in real life who doesn’t make you empowered, informed or inspired. As youths, it is vital we self-analyze and realize how our reactions affect us and others. Always remember that you create the atmosphere that surrounds you through your response to situations.  It should be our goal to be as steady as water and not as reactive as soda! Stay calm and thoughtful even in the face of obvious provocations.

QUOTE OF THE WEEK: “The wise respond; the otherwise react”- Raheel Farooq

Hack Away The Unessential: 5 Things To Cut Down In Order To Live A More Fulfilling Life
Stay Away From People Who Talk Bad About Others!