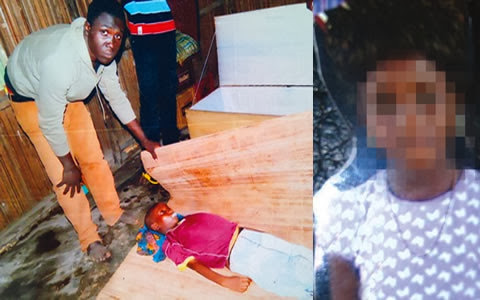 Another shocking rape case has happened in Ikorodu area of Lagos State Nigeria.

This time around, it involves a 14-year-old boy, the son of a school owner and an innocent 9 year old girl.

Onyi Adimabua, a 14-year-old boy who confessed he is a pornographic movie addict claims he learnt about sex by constantly watching blue films.

Lagos state police officials have commenced investigation into how the 9-year-old girl died after sustaining severe injuries due to consistent rape.

The bereaved father of the dead girl, Mr Simeon Jigo said that Onyi Adimabua is the son of the proprietor of the school his daughter attended. He said his daughter opened up about the rape when she started having medical problems. She eventually passed away on October 3, 2013…

Up until my daughter’s death, she was a pupil of Fulfilled Greenland School, Ikorodu, and she was in primary three. One day, she came home and started complaining of pains around her vagina, stomach area. We rushed her to Ikorodu General Hospital.
A doctor checked her and after conducting some tests on her, told us that my daughter had sustained medical complications due to forced sexual intercourse. I was alarmed by this; so, I had a private discussion with my daughter.
She told me that it was her school proprietor’s son, Onyi, that had been raping her. The boy had threatened to kill her if she ever told anyone about it.”

Mr Jigo who hails from Ondo State took his ailing daughter to Arogobo in Ondo State for medical treatment but her condition worsened.

On getting to the house where my daughter was, we discovered that she was dead. Onyi confessed that he had been raping my daughter prior to her death
After the girl’s demise, irate youths in the area attempted to lynch the 14-year-old boy.

The bereaved father was said to have intervened and reported the matter to a nearby police station, where the teenager was held for safe keeping. The next morning, Onyi and his parents travelled back to Lagos.

The alleged rapist’s parents, in company with a chief in Ikorodu, reportedly visited Jigo when he returned to Lagos. The group were said to have pleaded that the bereaved father should not pursue the case but he refused. Jigo said:

“I went to the Ikorodu Police station to report the case but was surprised when the policemen on duty said I should not write any statement.  They only told me to write down my telephone number and said they would call me later.
After waiting for many days without any call, I wrote a petition and the matter was transferred to the State Criminal Investigation Department, Yaba.
It was however learnt that Onyi had been taken to his father’s hometown in Delta State thereby stalling police investigation.”

The teenager’s parents, however described the incident as the handiwork of the devil. The 14-year-old boy’s father, Andrew Adimabua, said,

I trained that boy in the way of the Lord and expected so much from him. He has confessed to the act; there is nothing to hide. He told me that he learnt about sex by watching blue (pornographic) films.

We are not hiding him and we will cooperate with the police. On the day the little girl died, he was beaten up and made to stay in the rain for hours. As a result, he contracted pneumonia so we sent him home for treatment. When he recovers, he’ll be taken to the police for questioning.
Police Public Relations Officer, Ngozi Braide, who confirmed the  said:

It is appalling that a teenager could indulge in such act. The matter is under investigation and the culprit will be re-arrested.

How did this young boy get access to pornographic movies?

This world is coming to an end oooooo.