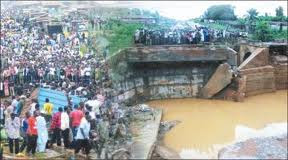 Heavy rainfall on Saturday evening swept off the makeshift bridge on Apete River in Ibadan, Oyo state causing the river to sweep off 25 people who were on top of the bridge.

Since then, concerned youths have been protesting against government insensitivity to the plight of the residents of the area.

As at yesterday, the situation was still tensed in Apete community even as business activities were paralysed at Apete Market. Also, .

Armed policemen and men of the state security outfit, Operation Burst, were seen in the community yesterday.

No fewer than 10 vehicles belonging to security operatives were stationed in strategic locations in the community, while there was heavy presence of armed policemen at a fuel station close to the collapsed bridge and one of the entrances to The Polytechnic, Ibadan.

Men of Operation Burst were keeping vigil at the community to keep at bay restive youths protesting last Saturday’s death of some members of the community.