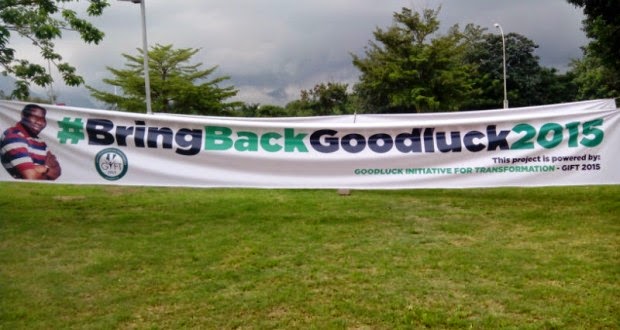 It is pathetic that the current administration is out of touch with what is going on in the country presently.

Several months after Boko Haram kidnapped Chibok girls, a campaign tagged #bringbackourgirls started on the social media to aid the release of the girls but no success was recorded.

As we speak, the over 200 girls are still in Boko Haram’s camps while many of them have died of snake bites and sickness due to lack of care.

President Jonathan is now using the same strategy to campaign for his reelection next year. The campaign banner was spotted today at Unity Fountain in Abuja.

Seriously what is going on, is GEJ this insensitive.

#BringBackOurGoodluck2015 is absolutely a bad taste. It obviously dehumanizes the #Bringbackourgirls campaign and shows the level of sycophancy exhibited by some desperate political group in Nigeria and Aso Rocks’ insensitivity to the pain of these parents.

Imagine how the Chibok parents will be feeling if they come across this.