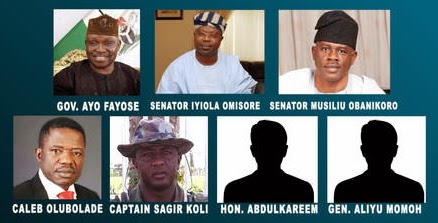 You must have watched the leaked audio conversation between Ayo Fayose, Obanikoro and Omisore that got taped on June 20 2014 by Captain Sagir Okoli who fled Nigeria recently.

In the audio recording, it was also revealed how the politicians bribed Brigadier General Momoh with a promotion for his assistance in carrying out election fraud in Ekiti.

When he fled Nigeria after he was declared wanted, his brother was arrested by the military, starved, maltreated and fed with worms before being released after a petition.

That sticker is from those vehicles, his own was sent to him, mine was sent to me, the one for SSS was given to me to give to them, and we agreed. There is no vehicle that left this place without that sticker. The people you just dis-armed had that sticker on their bonnet clear and clean.

Listen to me sir, let me tell you what is going on here, today they went to Efon (Efon-Alaye, a region in Ekiti state) they carry all the… when they are supposed to be collating, I think it was this man…….(tries to remember)

The went when they were supposed to be collating.

The thing INEC gave to us, soft copy, we now printed everything so that….he now told me because they see INEC thing on top of it. Why is my contact man who told them? I said will my contact man now be sitting with you at the check points permanently?

Let me land sir, Let me land sir…I convinced this man to leave this people, they were set to be left like this inside the sun, they packed all the computers, It took me more than 2 hours to get this man to release these people, we have been subjected to serious embarrassment.

I don’t want to keep you here more than necessary, because we are not alone in this thing, and we have to be fair, even though we have a direction that we want to achieve.

Your excellency, we are here because of you, and it’s you i want to please.
Momoh is here before you, let us give him an assignment.

Are you taking notes? (He asks)

Obanikoro: ‘Don’t talk too much, I want you to go and work and deliver for us, look here you can’t get promotion without me sitting untop of your military council.

If I am a happy man tomorrow night,ehen, the sky is your limit.

The Politicians also requested the deployment of a “Special Team” including a “Strike force” to ensure their plans are executed.

Obanikoro: Do you have a special team?

Momoh: We have about 6 special teams

Obanikoro: No, your own

Momoh: I have one, strike force

Obanikoro: See the idea of calling you and not getting reactions, we have to stop that now.

You must bring that one in.
When we call you, within the next 5, 10 minutes we want to know what has been done about it, and we want to get the feedback on our own that this thing has been done.

All those that they dis-arm, tell your men they must release them, and then put 2 or 3 of your men in charge of that.

Then that Daramola, I want him picked up in the morning. [Bimbo Daramola is Governor Kayode Fayemi’s Campaign Manager]

Everybody responds: No, No, No Tonight!!!!
Omisore speaks:

What I will just say is that we don’t have to argue this much, we have seen some lapses, yes. The point is that, there is nothing that happens now that we can’t contain before tomorrow morning.
There is nothing.

We have been together in this matter, some of your boys can be over zealous and do things that are nonsense, and some can be compromised as well, you know yourself too.

Omisore: What i am saying Momoh is that ehen look, at this level any information you hear from us we are here on ground, move swiftly to these information and do them.

Ok o we will go and find out, so, so where are you, so so you know what happens.

So as we are here today, there is no point in hurting.

We have areas that are faulty areas, go into it Ikere, Ilawe let them confirm what happened there.

My friend major is talking to the Owa of Oke-mesi himself, lets talk to those people, that’s all.

And where did Obanikoro take his orders from?

‘I am not here for Tea-Party, i am here on assignment by the president’
Listen to full conversation below
The audio tape


HOW SARAHA OBTAINED THE LEAKED TAPE

The audio recordings and affidavit were provided by Sagir Koli, a Captain in the 32nd Artillery Brigade stationed in Ekiti State, who has since fled the country for fear of retaliation. Capt. Koli recorded the conversation on 20th June 2014 when he was asked to accompany his Commanding Officer, Brigadier General Aliyu Momoh, to the meeting. The venue was held at Spotless Hotel in Ado-Ekiti.

The audio recordings depict the meeting as being attended by the eventual “winner” of the election, Governor Ayo Fayose of Ekiti; Senator Iyiola Omisore; a man identified as Honorable Abdulkareem; the Minister for Police Affairs Caleb Olubolade; and Senator Musiliu Obanikoro who was at the time the Minister of State for Defence. Mr. Chris Uba came to Ekiti with huge stash cash and soldiers from the East to carry out the assignment.

The longer recording details the conversation between these men as they bribed Brigadier General Momoh with a promotion for his assistance in carrying out election fraud in Ekiti. In it, Obanikoro is clearly heard informing the group of men, “[I] am not here for a tea party, am on special assignment by the President.”

It was also gathered that President Goodluck Jonathan had instructed the Chief of Defense Staff, Alex Badeh, to use the army in arresting and intimidating opposition politicians before and during the election. The audio recording provides exact details of the plot, with the collaborators almost degenerating into physical combat.

Authentication of Audio Recordings and Proof of Election Fraud

The audio recordings were analyzed and authenticated by Guardian Consulting, an independent US-based security consulting company. According to a report authored by Guardian Consulting, in the possession of SaharaReporters, the independent company used Forensic Voice Frequency Comparison technology to identify all voices on the recording with audio available in the public domain.

The then Deputy Defense Minister, Obanikoro clearly states to General Momoh that he was not only sent to the meeting by President Jonathan, but “you can’t get a promotion without me sitting on top of your military council. If I am happy tomorrow night, the sky is your limit.”

Governor Fayose revealed that he had already bribed an official of the Independent National Election Commission (INEC), the non-political commission charged with organizing elections in Nigeria, to bring copies of voter ballots with the INEC logo to him that day. Fayose, upset that his INEC contact was caught in traffic, narrated his day’s frustrations: “Where are we supposed to be collating the thing INEC gave to us? Soft copies we now printed? Why is my [INEC] contact not with [the ballots]…my contact man [was] sitting in the check point…it took me more than two hours to get this man.”

As the plotters began to argue, Omisore, who was running for Governor of Osun State on the PDP ticket, tried to calm the room: “I would just say that we don’t have to argue so much, we have seen some lapses [today] yes. It’s just this evening, there is nothing happening now that we cannot contain before tomorrow morning.”

Plans to Rig Elections in Favor of PDP

The eyewitness testimony and sworn affidavit by Capt. Koli corroborates the audio recordings of the PDP officials’ plans to manipulate the Ekiti elections. The plotters devised several plans intended to bring about an unlawful victory for PDP candidates in Ekiti State races, including the forging of INEC ballots, the use of the military to facilitate access for PDP operatives and supporters, the creation of a list of APC members to be arrested, and the deployment of a Special Team of military personnel to prevent APC voters from reaching the polls.

The PDP officials told General Momoh that those soldiers on election duty “must work hand-in-hand with the PDP agents” and ordered the arrest of selected APC stalwarts as that could “greatly assist the party during the election including DG campaign organization for Dr. Fayemi, Mr. Bimbo Daramola,” Capt. Koli said in his affidavit.

General Momoh, confronted with criticism by the group, defended himself by saying that “we have done a lot of [APC] arrests.” It would be recalled that there were arrests of APC members in Ekiti during the period. It would also be recalled that many members of the security offices paraded around Ekiti in disguise.

The PDP collaborators also demanded that the military block APC members’ access to the electorate and that moles should “be careful because the consequence will be severe.”

Soldiers were instructed set up roadblocks leading to the polling stations and prevent APC supporters’ access. Additionally, vehicles and individuals with a special sticker labeled “National Security Task” were allowed movement anywhere, and were only distributed to PDP agents.

General Momoh informed the group that there were “about 6 special teams. I have one strike force. I have almost forty soldiers after deployment,” evidently an organized system being used to manipulate voter turnout.

Capt. Koli’s statement explained that based on these strategies, “they succeeded in rigging the Ekiti State election with victory in all the 16 Local Governing Authorities (LGAs). These really inspired them and they were with the euphoria that same would happen in Osun State.”

Indeed, leading into the Osun State elections the Brigadier General posted there was told to take a three-week leave during the elections. His position was temporarily filled by General Momoh, who then repeated the same fraudulent tactics in Osun.

SaharaReporters was provided with additional evidence that proves the military retaliated against Capt. Koli when he released this information. Capt. Koli fled before he was arrested, but the military arrested, secretly detained, and chained his brother Adamu to a bed for nearly five months at the Adekunle Fanjuyi’s Cantonment.

In an exclusive phone interview with from his hideout outside Nigeria, Capt. Koli told SaharaReporters that his brother was starved for periods of time and sometimes “fed worms.” Adamu was only released after a petition, which is also in possession of SaharaReporters, was submitted to the National Human Rights Commission by Barrister Chief K. Akinola Ajayi.

The treatment of Capt. Koli’s brother was so poor during his illegal confinement that he had to be hospitalized due to malnutrition.