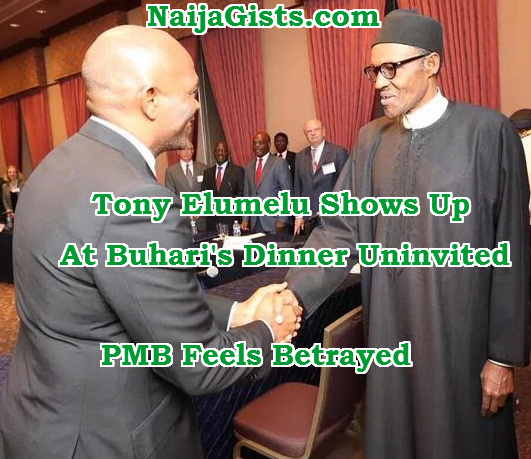 It is now beyond speculation that the dinner Presi­dent Muhammadu Buhari had with the Nigerian business community in Washington after his official business with US authorities had a sour side to it.

At the dinner attended by mainly the team the president left Nigeria with and the business commu­nity of US made of mainly Nigerians and foreign­ers, two powerful Nigerian bankers (Tony Elumelu & Jim Ovia) that also owned banks sometime ago were found there.

During his remarks, Buhari departed from his prepared text to tell the surprised crowd he was surprised to see Mr. Ovia, and that he thought the CBN Governor had brought him along.  He also expressed surprise at the presence of Wale Tinubu, who happens to be a good friend of Buhari’s All Progressives Congress chieftain, Bola Tinubu. 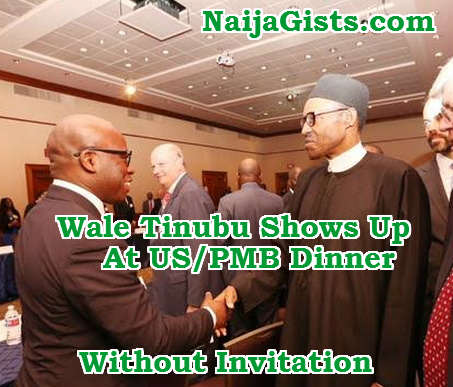 The crowd, which mostly comprised of US businessmen, did not fully understand the heart of Buhari’s position which wasn’t part of his prepared speech for the evening.

Daily Sun source that was part of the president’s entourage and also at the dinner confirmed that the president confronted the two who had been part of the economic team of the past PDP administrations on their mission at the gathering.

In a telephone discussion with Daily Sun yester­day evening, the source disclosed that contrary to the trending news that the president excused the two from the dinner, he only asked them how they got to the event since he did not invite them or were they part of his team from Nigeria.

“I am sure what raised the curiosity of the presi­dent is because he approved the list of the people that travelled with him himself and those that were meant for the dinner. He didn’t leave that to anybody to do, therefore he is aware of those that he invited. So it was somehow embarrassing that he saw them there especially with their relationship with the PDP ad­ministrations since 1999.

“He asked them why and how they got there and everybody heard it because it wasn’t in secret, the source hinted authoritatively.

Because of the link and clout the two have in the banking sector, Daily Sun found that, early yesterday, Nigerian time, the Governor of the Central Bank of Nigeria, Mr. Godwin Emefiele (CBN) that was part of the president entourage was sent back to Nigeria for betraying Buhari’s trust.