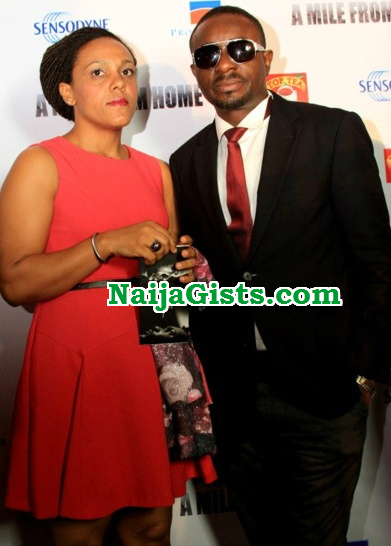 The hearing for the divorce case between Nollywood actor Emeka Ike and his wife Suzanne Emmanuella Ike came up yesterday, Wednesday July 22nd , 2015 at a Lagos Island Customary Court where the beautiful mother of four opened up on why she left her marriage.

Emmanuella Ike said she is done with the marriage and wants to put a total end to her 12 years of torture.

The actor who was represented by his lawyer yesterday begs the judge to cancel the divorce case because he is still interested in his wife.

In Emeka Ike’s defence, Barrister Labi Lawal said he couldn’t appear in court because of his failing health.

“My client is ill but I will try my best possible he comes on the next adjourned date. We indulge the court to give us six months from this day to see if there is possibility of settlement between the couple,” he told the judge.

Emmanuella Ike moved against the 6 months request from Barrister Labi. She said it was too long adding that Emeka Ike had 2 years to reconcile with her but he didn’t.

“The last time I wanted to speak with our children, it was my mother-in-law who picked the call and asked if I had read Exodus 21 which says that if I go, I shouldn’t return.”

“If I was still with him, I may not survive. I was 19-year old when I met him and he was the one who deflowered me. I see no reason I shouldn’t be treated with utmost respect.

“Due to physical torture, my health has been affected. There was even a time I thought I had breast cancer because I felt a lump on one part of my breast.”

”I almost went mad last Sunday when my first son told me on phone that if I truly loved them, I wouldn’t have abandoned them. Even my seven-year-old son whose day wouldn’t be complete without seeing me said he doesn’t love me. I love my children. I miss my children. I never abandoned them. I am in pain. They don’t have any other mother. I really need my children. I am a good woman; I endured so many things as his wife.”

Before the court rose, Chief Awoosola who presided over the case said Emeka Ike is only given two weeks to appear in court if he really wants settlement.

The case is set for settlement hearing on the 12th of August 2015.