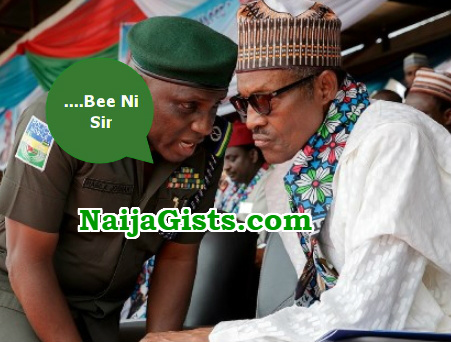 Wednesday Feb 7, 2018 – Buhari, His Aides And “Bee Ni Sir” Syndrome: The Real Enemies Of The President

Sometime in February 1995, l told Chief Gani Fawehinmi l wanted to have a private meeting with him. I had noticed certain things around him which l didn’t like and because of our close relationship, l felt l needed to discuss with him one-on-one.

He fixed the date and at the beginning of the meeting, l instructed his office assistant that she shouldn’t allow any visitor or staff members to come in.

I spoke with Chief candidly, shooting from the hips. “I need to save you from yourself”, l told him. He was nodding intermittently. In the course of our meeting, the intercom buzzed and he attempted to pick it up but l “ordered” him not to pick. “Sorry Chief, you can’t pick that call”. And he complied. At the end of the meeting, he thanked me profusely and promised to make amendments.

He was not bound by my suggestions but because he respected me and he knew l did that out of genuine love, he appreciated my intervention.

Few days after, we were in his office and a close staff, instead of disagreeing with Chief over an issue, rather prodded him on by saying ” beeni sir”. I got angry and told the person “stop deceiving this man by telling him ‘beeni sir”.

Why am l saying this? The greatest problem of leaders are their diehard, blind supporters. To them, it is ” see no evil, talk no evil”. That is the stage Buhari is in right now. The “beeni Sir” crowd, both on the social media and around him, have blinded him not to see the reality, making him to live in the fools paradise, so to speak. Everything the government does, no matter how stupid, is rationalised. Criticism is an anathema.

But you see, praise singing would send a leader into perdition. Let the president feel the heat so that things can improve. It is in his own interest. “Beeni sir” syndrome would not help him, if you really claim to love PMB.

2 thoughts on “Buhari, His Aides And “Bee Ni Sir” Syndrome: The Real Enemies Of The President”