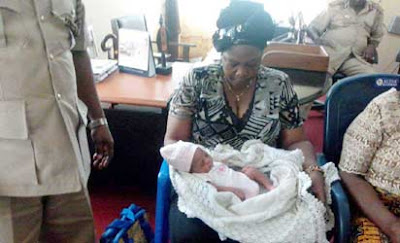 Mrs Evelyn Atemkeng, a barren Cameroonian woman is cooling off in Police detention after she was arrested by Nigerian Immigration Officers.

The 42-year-old woman was nabbed by Immigration officers at Calabar port while returning from Delta State with a 3-day-old baby boy.

According to immigration officers who saw her when coming into Nigeria on Friday via a ship, Evelyn didn’t looked pregnant neither was she with any baby.

The bubble bursts on Tuesday when the same Immigration officers saw Evelyn trying to return to Cameroon with a newborn baby.

She was immediately stopped and questioned.

After several hours of questioning, she claims she delivered the baby boy on Saturday in Calabar.

Unsatisfied by her response, the officers on duty handed her to a female immigration official for further examination.

The officer said she had no sign of delivery.

She was immediately arrested with her 70-year-old mother, Mrs Anastasia Fambong who followed her to Nigeria.

Evelyn Atemkeng later confessed to police that a matron sold the baby to her in Delta State, Nigeria and that she paid 1.2 million Naira into the matron’s account.