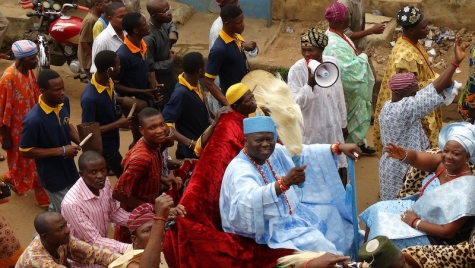 The Deji-In-Council in Akure has officially announced the sudden death of the Deji of Akure Kingdom, Oba Adebiyi Adegboye Adesida (Afunbiowo II).

The Council Chiefs declined comment on the cause of death, but sources revealed that the late king suffered from cancer. One source said that in addition to the use of traditional medicine, the monarch had even traveled overseas for treatment but to no avail.

After presiding over a meeting of Palace Chiefs today for several hours, the SAO of Akure Kingdom, Chief Adewole Adebayo, addressed journalists, telling them the demise of Oba Adebiyi was a rude shock to the ruling family and the entire people of Ondo State, and underlining his immense contributions to the development of the state. 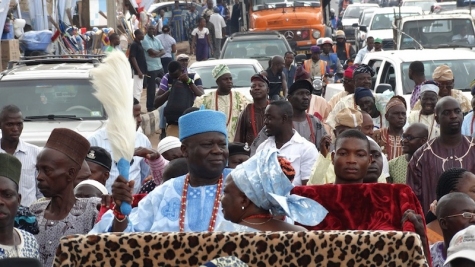 He noted that the late king had enjoyed commendations and recognition from far and near, including an award for ‘love for peace’.

“He scored the highest vote that no Oba has ever scored in Nigeria. He contributed to the development of our State and the country; no doubt, he was referred to as the lover of peace”.

He also told the journalists that the traditional rites for the late Oba will be announced on Monday following a meeting of all traditional chiefs and Council-of chiefs.

Also addressing indigenes, including market women and well-wishers of the king who had besieged the palace gate shortly after the proclamation, Chief Adebayo disclosed that all market and shops in the entire town will remain closed until further notice, and warned against non-compliance.

Immediately the news of the Oba’s demise circulated in Akure today, market women and other traders in the town, mostly those close to the popular ‘Oba’s market’ hurriedly closed down their shops. Some of them were seen packing out their goods for fear their shops might be shut down.

SaharaReporters learnt that the situation at the palace was tense, palace attendants chanting dirges and traditional songs and all the mourners wearing sorrowful looks.

A family source told SaharaReporters that Oba Adesida last attended a public function two weeks ago in Lagos where he celebrated the wedding ceremony of his son, Adetunji Oluwagbemiga. He was billed to attend the launching of a book this week at the NUJ Press Centre where he was due to be the royal father of the day.

Oba Adesida was also the Chairman of the Council of Obas and Traditional rulers in Ondo State. He received his staff of office on September 5, 2010 from Governor Olusegun Mimiko amidst a controversy which followed his nomination as the next paramount ruler of the ancient town.

Prior to traveling abroad, he worked as an Agricultural Credit Officer in Ondo State before moving to Otta Farm where he served as an aide to former President Olusegun Obasanjo between 2007 and 2009.

The late king, who was born into the ruling family of Ojijigogun in 1950, is survived by his wife, Olori Mojisola, and four children.

The Governor of Ondo State, Dr. Olusegun Mimiko, has described the passage of the king as ‘shocking to the marrows,’ lamenting that a ‘tiger has fallen into a deep sleep’.

In a statement made available by his Chief Press Secretary, Eni Akinsola, the governor said the news of the demise of the first class royal father and Chairman of Ondo State Council of Obas was shocking because the late Oba was vibrant and active and had an aura of health and life around him.

Mimiko described the Deji as a true leader of the people who contributed greatly to the development of the state who “wrote his name in gold in the history of Akure kingdom with his short period of stay on the throne of his forefathers.”

The governor added that the people of the town have lost a great father whose love for the kingdom is unparalleled, and that the government is yet to come in terms with the sad news and the gap the Oba left behind.