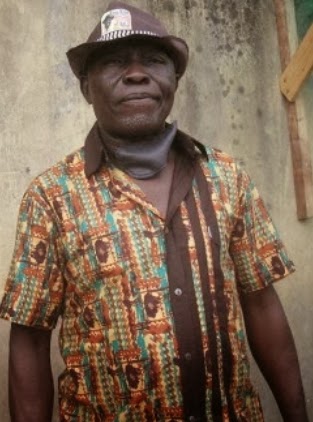 The man pictured above is a popular Pastor and politician in Bariga area of Lagos State Nigeria. He is the secretary for the Bariga chapter of the new APC party.

According to local residents, Pastor Abiodun Adeboyejo popularly called JP passed away on Saturday at his office in Bariga.

After every effort to reach him proved abortive, his landlord called police officials who forced his office door opened after smelling an unpleasant odour like that of a dead rat coming from his office.

Residents said JP appeared hale and hearty on Saturday while exchanging pleasantries with family and friends.

The financial secretary for All Progressive Congress, APC passed away at his office on Akinromola Street in Bariga Lagos on Saturday night.

Hear what his landlord’s son said about his death:

“We did not know he was dead inside his office until he started smelling. At first, we felt a rat had died there and we tried to call his line to inform him of the stench coming his office, all to no avail. It became clear that something was amiss when one of his wives came around to announce that their husband didn’t come home,”. “At that juncture, we called the police who eventually came to force the door open; and we found him dead on the floor,”

Pastor Abiodun Adeboye is survived by his two wives and many children.