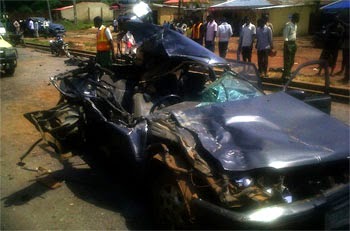 Nine others in critical conditions were taken to the state University Teaching Hospital, Ado-Ekiti, the state capital.

Sources told reporters that some students, who were returning from a night party, rammed into an oncoming vehicle conveying the women.

Clothes, shoes and other personal items belonging to the students littered the scene of the accident.

The students were in a grey colour Mazda car with a registration number Lagos KJA 608 CD and the women were being conveyed in a commercial Nissan saloon car marked Osun AA 529 FTD.

Sources said the students had attended a party organised by a final year student of the institution before the collision.