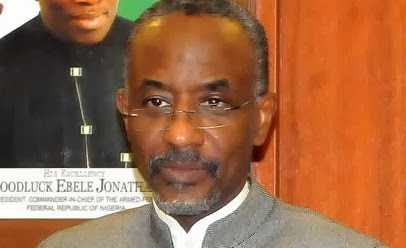 He was fired today due to lack of financial accountability that has plagued the Central Bank of Nigeria in recent months.

Read the official press statement released by Reuben Abati (Special Adviser on Media and Publicity to GED) on behalf of President Jonathan below:

Having taken special notice of reports of the Financial Reporting Council of Nigeria and other investigating bodies, which indicate clearly that Mallam Sanusi Lamido  Sanusi’s tenure has been characterized by various acts of financial recklessness and misconduct which are inconsistent with the administration’s vision of a Central Bank propelled by the core values of focused economic management, prudence, transparency and financial discipline;

Being also deeply concerned about far-reaching irregularities  under Mallam Sanusi’s watch which have distracted the Central Bank away from the pursuit and achievement of its statutory mandate; and

President Jonathan has further ordered that Mallam Sanusi should hand over to the most senior Deputy Governor of the CBN, Dr Sarah Alade who will serve as Acting Governor until the conclusion of on-going investigations into breaches of enabling laws, due process and mandate of  the CBN.The President expects that as Acting Governor of the Central Bank, Dr. Alade will focus on the core mandate of the Bank and conduct its affairs with greater professionalism, prudence and propriety to restore domestic and international confidence in the country’s apex bank.

The Federal Government of Nigeria reassures all stakeholders in Nigeria’s financial and monetary system that this decision has been taken in absolute good faith, in the overall interest of the Nigerian economy and in accordance with our laws and due process.
Reuben Abati

The former CBN Governor who was in Niger Republic when his suspension was announced has returned to Nigeria.

He was on an official visit to an ECOWAS event when President Jonathan fired him.

Sanusi arrived Lagos few hours ago. On arrival, State Security officials, SSS seized his passport and detained him briefly before releasing him.

Sanusi was accompanied by his in-law to be, Mallam Nasir El-Rufai.

In a recent interview, Sanusi claimed he is not a criminal and vowed to challenge President Jonathan in court.

Sanusi said he doesn’t want to return to his office but he will challenge the fraud accusation levied against him by President Goodluck Jonathan. He also vows to preserve the integrity and independence of the Apex bank.

Watch his recent interview on CNBC below:

Before his sudden suspension, Sanusi was planning to marry his 4th wife, the younger sister of Mallam Nasir El-Rufai.