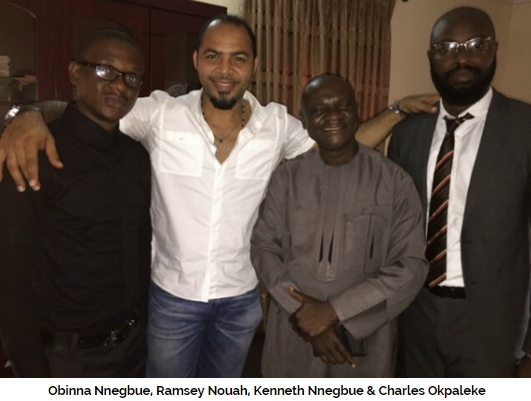 23 years after the release of Nollywood hit epic movie ‘Living in Bondage’, award winning Nollywood Star Ramsey Nouah in partnership with entertainment entrepreneur Charles Okpaleke are set to produce the sequel to the flick that was the forerunner of the Nollywood phenomenon.

Okpaleke, CEO of Play Ent. Network, it was learnt, has already bought the rights from Kenneth Nnebue, the original producer and writer of the movie that changed the architecture of the home video industry in Nigeria.

Speaking on the remaking of the movie, Ramsey, who is an ardent advocate for New Nollywood, explained the need for a sequel of the movie.

“There is no way you will mention Nollywood without talking about Living in Bondage. It is the kickstarter for the industry I work in today. Its ability to appeal to everyone irrespective of their religious, cultural and social beliefs made it a huge success. The movie addressed issues that we couldn’t talk about then,” the actor said.

According to him, the movie Living In Bondage’s beauty lies in the language used which is understood by a certain part of the country, yet was watched by many.

“So why not bring back this great movie in our contemporary world? The film is a delight any day. People still talk about the way Kenneth Okonkwo killed his wife for money rituals and how he was tormented. Don’t forget the likes of Kanayo O. Kanayo and Bob Manuel Udokwu who intrigued us with their roles. All these made the movie a great hit and we are sure that the sequel will do better,” he assured.

Okpaleke also said having the rights to produce the sequel to Living In Bondage is a huge milestone.

“It’s not often that we visit our roots and bring the story in our present situation. Living in Bondage may have its flaws then but bringing those characters back to our present situation is really interesting and I’m sure it will spark up public discourse that will perhaps engineer growth and development in the industry,” Okpaleke stated.

In 1992, Kenneth Nnebue assembled a crop of talented actors including Kenneth Okonkwo, Kanayo O. Kanayo, Bob Manuel Udokwu and Okey Ogujiefor to deliver a production that tells stories that mirrored the myriad of issues confronting an average Nigerian and kick-started the film industry of today Nigeria.

Preparations are already in full swing to ensure that the production of the remake is not only smooth but also to record huge sales in the box office.

The movie is estimated to gulp millions of naira and will feature a robust cast that will bring magic to the screens.