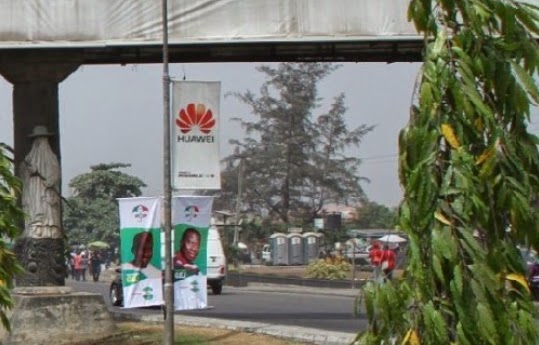 Huawei had secured the old tollgate location by Motorways, Ojota, Lagos, for a period of one year and had paid the mandatory Lagos State Signage & Advertisement Agency (LASAA) fee for their campaign. Sources at Huawei said the deployment of Goodluck Jonathan campaign materials alongside theirs was unacceptable and therefore had no alternative but to cancel the contract.

Touch Point in a statement said ‘Our client, Huawei cancelled the contract saying it was due to the breach by the PDP to run a parallel campaign on poles solely reserved for Huawei’’.

The statement went on further: ‘Elections should not be used as an avenue to disrupt the honest business of hardworking Nigerians. There are procedures for deployment of items on street lamp poles and, going through this crude means is not only damaging, it is unfair, inconsiderate and above all illegal by a political party that seemingly prides itself on the rule of law. I have spoken with my lawyers and we are considering legal action over this inconsiderate action by the PDP and its agents’’.