The issue of employee brutality among foreign investors and businessmen in Nigeria is on the rise.

Just 2 weeks ago, an Arab man killed a Nigerian construction worker in Enugu. This happened less than 3 weeks after an employer kicked a pregnant Nigerian woman on the stomach in Lagos causing her to miscarry during an argument at work.

Another case has happened in Ogun state Nigeria. An employee of Jivan Plastic Company simply identified as Owolabi said his employer beat him to coma on his first day at work.

Hear Owolabi in his own words:
“I was bringing out PVC materials out of a bag and Mike said I was not handling the materials properly. He kicked me and slapped me repeatedly so I held unto his shirt to prevent him from beating me further.

“However, his cousin, Tony, smashed a bottle on my head and they beat me until I fainted and woke up on the way to Makun Police Division covered in blood.”
“I am not after money but I just don’t want a situation whereby Nigerians are treated badly by foreigners in their own land.” 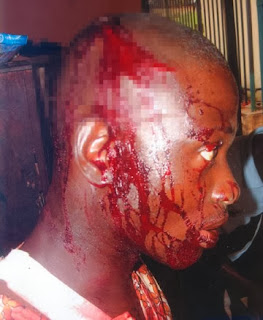 After reporting them to the police, Owolabi said the police ignored him and refused to arrest them because they’re foreigners.

However, he reported the case to Punch Metro and after the publication, Police officials immediately went to Sagamu to arrest the suspects.

The suspects Mike and Tony Jackson have apologized to the victim.

They even offered to pay him money but Police have refused to release them.

They will stay in detention until investigation is done.

Their arrest has been confirmed by Muyiwa Adejobi, Police spokesperson.

“The matter is at the SCID and we are compiling the case files. We want to assure members of the public that justice will prevail,” Adejobi said.