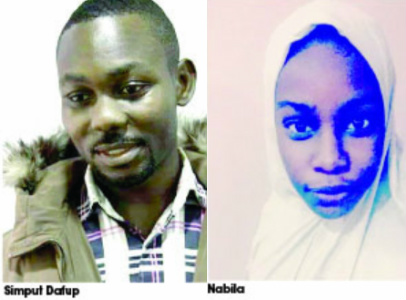 For two weeks now, life has turned bitter for 64-year-old widow, Lydia Dafup. Her only son, Simput Dafup, an engineer, was allegedly tortured and abducted by men of the Department of State Services (DSS) for converting his friend, 19-year-old Miss Nabila Umar Sanda Galadima, from Islam to Christianity.

Simput, 29, and Nabila met four years ago on a flight from Dubai to Nigeria when they reportedly struck up a conversation. Nabila was from a Muslim home while Simput had a strong Christian background.

It was gathered that Nabila confided in Simput that she wanted to convert to Christianity but Simput cautioned her against such, saying her action might not be welcomed by her parents. At the time, she was 14 years old and a student of Air Force Girls College, Jos.

Since then, it was gathered, they have been in touch with each other and Simput eventually helped her secure admission to the famous Bingham University, Karu, Nasarawa State, where she is currently in 200 Level.

It was alleged that her father, Alhaji Umar Sanda Galadima, from Biu in Borno State, was aware of the development. It was also gathered that both families have even developed some relationship. Mrs. Lydia Dafup said she had been speaking with Nabila on phone while the family of Alhaji Umar was also in touch with Simput.

But trouble started on Sunday, January 7, 2018, when Nabila suddenly came to Simput’s residence in Jos, after she informed her parents of her intention to convert to Christianity. When the parents were openly opposed to such moves, the lady reportedly fled to Simput in Jos.

Simput said he was confused when the 19-year-old Nabila burst into his residence. He later took her to one Evangelist Jerry Datim, who he believed was in a better position to handle the delicate matter, which could snowball into a religious crisis.

Evangelist Datim, it was learnt, sat Nabila down and interrogated her on why she wanted to abandon Islam for Christianity. She was said to have insisted on becoming a Christian and face the consequences.

Datim hurriedly contacted the leadership of Jama’atu Nasiru Islam (JNI), Plateau State, because of the understanding between the group and the Christian Association of Nigeria (CAN) whenever issues of conversion arise from both faiths.

The leadership of the JNI, thereafter, obtained the phone numbers of Nabila’s father and mother. When the father was contacted, he reportedly said he was travelling but would direct his relations from Biu to come to Jos to address the issue.

But the following Monday, men believed to be from the Department of State Services (DSS) stormed Simput’s residence at about 10:45am and forcefully abducted him to an unknown location. His mother, Mrs. Lydia Dafup, said her pleas that her son should be left alone were ignored. 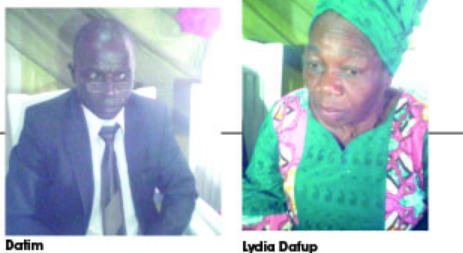 The widow said she had not set her eyes on her son since he was forcefully whisked away. She said his whereabouts have remained unknown even as no one had contacted the family.

Her words: “My son, Simput, an engineer, was on Monday, January 8, brutalised, tortured and whisked away from his residence in Jos by men we suspect were from the DSS for allegedly converting one Miss Nabila Umar Galadima from Islam to Christianity.

“The heavily-armed men, who stormed the residence of my son in five vehicles, blocked everywhere and assaulted people around the community. I am worried now because, as I talk to you, I don’t know the whereabouts of my son.

“Nobody has contacted me or any member of the family to inform us about where my son is. I know that some people that were found in the residence who were also assaulted and brutalised with my son were taken to Plateau State Command of the DSS.

“I am worried because these people told me that they didn’t see my son there. The men who whisked my son away put a mask on him and took him to an unknown destination. As a mother and a widow, I am worried about his safety.

“The assault, brutalisation and subsequent abduction of my son is horrible and uncalled for. He does not know anything about the said conversion but he is suffering the punishment of what he does not know. I want my son released alive.”

The aged mother, who lost her husband in 1993 when Simput was still a little boy, said she was the one responsible for the upkeep of the entire family. She said she didn’t know anyone she could contact so that her son could be released. She pleaded with the federal government and individuals to come to her rescue.

The widow said Simput, who would turn 30 this year, has been on his own, constructing gas plants since he finished the mandatory national youth service.

Evangelist Datim, who was with Nabila, was also whisked away with his wife and eight-month-old child to the offices of the DSS, Plateau State Command. He said he and his wife were also brutalised and tortured.

“The DSS stormed my house, beat me up and assaulted my wife, daughter and eight-month-old baby. They picked Nabila from my house. At the moment, Simput Dafup and Daniel Hassan, a taxi driver whose vehicle Miss Nabila boarded from Abuja to Jos, are nowhere to be found. No member of their respective families has been contacted,” he said.

He said the father of Nabila, a businessman vowed to deal with him on phone, saying he has all the connection within the security agencies to torture Simput and Evangelist Datim for forcefully converting his daughter.

Our correspondent made efforts to speak with Alhaji Umar Sanda on phone, but he never picked the calls. A text message sent to him to confirm the story was also not replied at the time of filing this story.