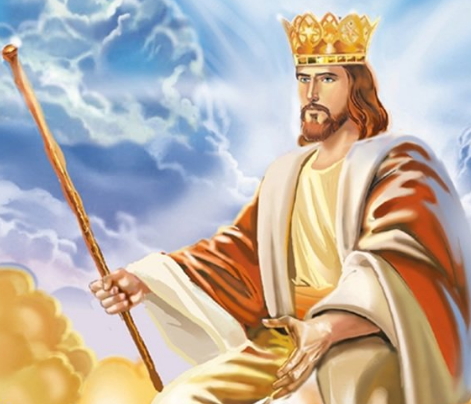 ‘Jesus Christ our king of glory is the reason for the season…’ declared a pastor friend of mine with regards to Christmas. True. Away from the hallmark revelry of some during Christmas, I believe the message and person of Jesus should take precedence in the celebration. But, I also believe Jesus was more of a literal king than a spiritual one.

So much ink has been spilt on paper over whether or not Jesus was born on the December 25 and whether or not he instructed anyone to commemorate his birthday, so that a debate on the subject now would be irrelevant. Because there are those-myself inclusive- who believe that the person of Jesus and his message rather than his date of birth is what matters.

Even though I agree with my friend that Jesus Christ was indeed a king, and that he is the reasons for the season, there are a few things I feel compelled to share about this man who walked the byways of Palestine some 2000 plus years ago, who we today celebrate as the ‘King of Glory’ because I believe there is a slight difference in what he thought his mission was and what the church preaches today. As a nation of more than half a population of Christians, shouldn’t we make efforts to know so well this man that we celebrate year in year out?

Though not an expert in theology, I believe as a researcher, I know a little to share a few things about the man Jesus that many Christians are either not been told or have not cared to find out for themselves. For example, not many Christians know that there are as it were, two ‘Jesuses’. That the Jesus of faith, of Christianity and religion is a very different person from the Jesus of history, the real Jesus, the king who never ruled.

Christians the world over believe Jesus Christ was literarily the saviour of the world. In fact, this belief formed part of, if not the major reason why the western world divided history itself into the time before and after the birth of Jesus. As I type these words, someone somewhere around the world is giving his life to Jesus and another one praying to him. For them, he is the incarnation of God coming into the world through a virgin. He taught humans how to live -on this particular point am in hundred percent agreement- paid the supreme price for sin at Calvary, rose from the dead and ascended into heaven through the clouds.

At the end of the world, he would return to decide which population of humans deserved eternal bliss in heaven with him and which part deserves eternal damnation in hell with Satan. This in summary is the Jesus of faith, the Christian Jesus who is still working miracles in the lives of many, of whom this article is not based.

This work is based on that other Jesus, the real Jesus of history, the king of the line of David who never ascended the throne but whose story has echoed down the ages. The man whose birth we celebrate in this season as we do every other year. In the sequel to this article, we shall look at his message.

Many today fail to realize that the corner of this planet where Jesus was born and lived out his live, Palestine, was a really troubled placed 2000 plus years ago. So much so that by 63 BC the land was in turmoil and ready for subjugation. In any case, about 50 years before he was born, history proves Palestine had already fallen to the armies of Pompey.

Though a line of Arab puppet kings were imposed, Judea the spiritual capital was subject to direct Roman rule and their regime was ruthless and autocratic. In fact, at a particular time, more than 3000 Jewish ‘rebels’ were summarily crucified – a fate Jesus himself would suffer in the years to follow. Roman brutality, contrary to the picture painted in the gospels, was deepened by Pontius Pilate, so much so that many Jews, frustrated with life, resorted to committing suicide as a way out of suffering during his reign.
There were countless insurrections, one of which led to the massive exodus of the Jews from the Holy Land. Matters came to a tragic end in AD 66 when all of Judea revolted, leading to considerable massacres of the Jews. The Fortress of Masada held out for some time before it too fell. This was the world in which Jesus was born.

Authors Michael, Richard and Henry explained in one of their epic work that at the time of Jesus’ birth no messiah or savior would have ever been regarded as divine. Contrary to what Christians may want us to believe, the Jewish desire for a Saviour King to deliver them from Roman oppression was legitimate as it was purely political. In fact, the term Christ, whether in Hebrew or Greek, meant nothing but an anointed political king. Recall that when David was anointed king he was called Messiah. Even Romans as well as many cultures in the near east in those days referred to their kings as such.

This is why the Jewish regarded the Roman puppet kings as false Saviours and were thus expecting their legitimate king; that unknown descendant of David’s blood who would free them from Rome’s yoke. The later Christian idea of a spiritual savior of the world, a ‘Son of God’ etc was the work of the gospels, which were based on Saint Paul’s writings – the epistles of Saint Paul were written before the gospels according to scholars.

In the gospel of Matthew, we are told in clear terms that Jesus was of royal blood, a descendant son of King David. We are told that at his death, the sign ‘King of the Jews’ was affixed to the top of his cross as an attempt at derision. But isn’t this a distortion of history? Could the sign be a true testimony to who he really was or was meant to be in a literal sense? Was the story of ‘The Massacre of Innocent kids’ two years and under that was reported in the gospel as a result of some genuine alarm on Herod’s part? Was he possessed of some real fear of being deposed? Does it make sense that Herod would be this afraid and commit this heinous crime if this king was a mere spiritual king whose kingdom was not of this world? Take note that at the time Jesus was born in Palestine, historically, countless men laid claim to being the savior, yet none of them attracted the reaction Jesus got, why so?

At Jesus’ birth, we are told Maggi from the East, kings, came visiting bearing expensive gifts. Tradition decided they were three part because of the number of gifts they came bearing but they could be anything from three upwards and they would have travelled in those harsh condition to Palestine with a large entourage. Though Jesus may not have been stupendously rich like some church founders of today, we know the whole idea of a poor Jesus of Nazareth was Saint Paul’s, which the gospels borrowed. Jesus was educated, trained as rabbinate, and we now know, at least from the gospels, that he had wealthy as well as poor friends.

Jesus was a legitimate king. He was not a pauper. How could he have been when kings from the east who ‘saw his star’ brought him expensive gifts? When he had a large group of disciples that needed a money keeper or treasurer? When solders casted lot for his seamless garment? When he attended a society wedding at Cana where he turn water to wine, when he rode in a boat that was comfortable enough for him to fall asleep in and so on?

I believe Jesus is the reason for the season, yet I also believe we should know the real Jesus and imbibe his message. He believed he was sent to his people, to unify them, drive out oppressors and restore the glory of Israel as the heir to David’s throne, and from the undistorted utterances we can glimpse from the gospels, he made this point very clear.

Because of this, the Romans and their Jewish collaborators came for him and the story ended. Or maybe not, because Saint Paul took it from there and spiritualized the whole thing, and today the world and the greatest religion it has ever known, Christianity, celebrates this Jesus. Saint Paul’s Jesus of faith, successfully discarding the Jesus of History and his message, giving little thought to the king that never ruled…

About the author: Albert Afeso Akanbi is a Novelist, Researcher and a Humanitarian. He is the author of three novels, a number of short stories and articles. He lives in Abuja, FCT, Nigeria and he is a father.
He tweets @a_feso

What Every Nigerian Must Know About The Evil Called MMM – Pastor Sunday Adelaja
Opinion: Why Do Nigerian Leaders Take Oath Of Office Without Fulfilling Their Promise?