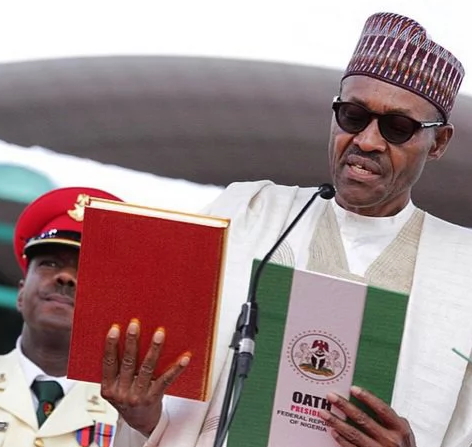 December 19, 2016 – Opinion: Why Do Nigerian Leaders Take Oath Of Office Without Fulfilling Their Promise?

Again, you have heard that it was said to the people long ago,

What has become of Public Office holders and the Oath of office sworn to in Nigeria in the 21st Century Democratic Governance?

That is for the governor of a State; so also every other office holder – including members of parliaments (both Federal and State). They have their own oath of office similar that they swore to.

All these oaths of office have common factors; and very glaring are: (1) affirm to be faithful to the Federal Republic of Nigeria; (2) not to allow personal interest to influence or over-ride their official conduct and decisions (3) to protect and defined the constitution of the Federal Republic of Nigeria (4) abide by the code of conduct in the performance of their duties; (5) to do right to all manner of persons (6) to devote self to the service and well-being of the people of Nigeria.

Now the questions – the multimillion question, what do we see of our leaders on governance today – from executive to the legislatives to the judiciary? Shall we have to hold some days fasting for our nation Nigeria, for Nigeria to experience a new dawn for a national development? A nation so bless. Retirees cannot be paid their retirement benefits; workers cannot be paid their salaries as and when due. Nigerian leaders do not see anything wrong even as some leaders even brag about it. They live on affluence. What a country!

Some have attributed these actions of governors and others to the immunity in the Nigerian constitution, but to the writer, it is because of the trust bestowed on the leaders due to the oath of office that they took on assuming office. This unfortunately was unblazingly abused, forgetting that it was a serious matter for someone to breach the trust or faith so given him. It is a serious sin that should attract very serious punishment. It was because of betrayal of faith in God and disobedience that the children of Israel were captured and carted away into slavery.

These leaders for breaching the oath to defend the constitution ought to have been deprived of all their assets, whether from ill-gotten wealth or not, and so get all forfeited to the State. Are these people human beings, God knoweth. This brand of leaders do not see anything wrong with what they do; they even brag about it while living in affluence. What a country

Continue Reading
You may also like...
Related Topics:Leaders, nigerian, oath of office