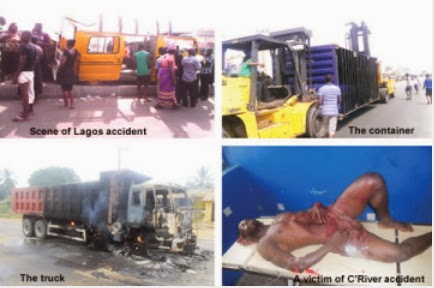 Wednesday December 25th, 2013 was a bloody day in Cross Rivers and Lagos state as multiple motor accidents claimed the lives of over 9 people.

On Wednesday, 5 people including a baby died in Lagos while 4 others died in an auto accident in Cross River State.

According to Punch Metro, a woman suffered serious injury after an articulated truck fell on a commercial bus on Alaba Suru Road in the Ajeromi-Ifelodun area of Lagos yesterday.

The fatal car accident that killed the baby and 4 other people happened while they were returning from Lagos Island.

It was said the two brothers went to purchase bangers for the New Year celebration.

The crash was said to have been caused by a mentally unstable woman, who laid in the middle of the road, thereby creating confusion for the truck driver who was on top speed.

Eyewitnesses told PUNCH Metro that the yellow LT bus, with number plate, MUS-975-XC, had also stopped by the side of the road to drop off a passenger, which precipitated the accident.

A resident, Mohammed Wasiu, said, “The incident happened around 8.30am. I saw the mad woman walking around this morning. She just decided to sleep on the road at that time.

“The LT bus was going towards Mile 2. There were about eight people in the bus. The driver decided to stop because someone wanted to get down from the bus.

“As this was going on, the truck was coming on full speed. There were two trucks; one was already ahead, so the second truck driver wanted to catch up.

“When he got to that point and saw the mad woman on the road, he wanted to avoid crushing her. As he maneuvered the truck, its side hit the bus, and the container fell on the bus.”

Wasiu said residents immediately rushed to the scene and began to cut the vehicle with saws in order to save the occupants who were in pain.

Another eyewitness, who did not identify himself, said, “The two brothers who were at the back of the bus were trapped. They had packs of bangers that they just bought. The woman, who wore a shawl, and was carrying a baby, could not also escape. They all died, including the driver.

“It was only a lady that was at the entrance to the door that escaped with a fracture.”

After the accident, angry residents were said to have seized the mentally unstable lady and beaten her up. Some of the residents said it was the second time she would trigger such accident. She was, however, rescued by policemen.

The NEMA spokesperson, South-West Zone, Ibrahim Farinloye said, “The incident happened at 8.30am, but we were not alerted till around 11.46am. NEMA was able to mobilise other rescue officials to the scene. At the end of the rescue operation, a woman and her baby with two men died, while a lady was rescued alive. She however had a fractured leg. The corpses have been taken to a mortuary in Oshodi.”

The police Public Relations Officer, Lagos State, Ngozi Braide, said she would call back to give details on the accident.

In Cross River, four youths were on Tuesday killed, while several others were injured after a Mercedes Benz 911 truck rammed into them by the road side at the Akamkpa area of the Calabar-Ikom highway.

The incident, which occurred around the state’s college of education in Awi, Akamkpa Local Government Area, left the community in mourning.

PUNCH Metro gathered on Wednesday that the truck with number plate, Lagos FKJ 505 XC, was immediately burnt by angry mob, while the driver, Chidi Duruba, and the truck conductor, Edwin Oragunye, were thoroughly beaten up.

An eyewitness, Ekam Emmanuel, said, “About 6am on Tuesday, some youths from Mbarakom community decided to go for a road walk along the Calabar-Ikom highway.

“A Mercedes Benz 911 truck with the number plate, FKJ 505 XC rammed into them from behind and the incident claimed four lives on the spot while several others were injured.

“This incident happened at 6am when I came to clean my shop. I met the youths jogging on the highway but suddenly a truck coming from Calabar on high speed climbed on the four that died on the spot.

“As a result of the tragedy, the Mbarakom youths got angry, the truck driver and his conducter were almost killed when they stopped to see what had happened. They were seriously beaten up, while the truck was set ablaze.”

Emmanuel said another truck, marked Cross River, KAM 45 XA, was also forcefully stopped by the angry mob and set ablaze. He added that the driver escaped being lynched.

She said the anger continued as the youths further burnt another oncoming Audi 80 commercial car, adding that the intervention of the combined team of military and police patrol teams brought the situation under control.

A police officer in the Akamkpa division, Eric Bassey, who is of the traffic department, confirmed the report. He said, “The DPO got an early morning distress call that there was a riot going on in Awi. He immediately gave us orders and on getting to the scene we discovered that three vehicles were burnt and some casualties were there.

“The casualties included some dead bodies, while several others, who sustained injuries, were taken to the hospital for medical attention.

“We were informed that the driver and the conductor of the truck that caused the accident were being held hostage at Mbarakom. We acted swiftly, but discovered that they had been beaten up badly. We rescued them and took them to the General Hospital at Akamkpa where they are still receiving treatment.”

According to Police spokesperson, Hogan Bassey, peace had been restored to the community.