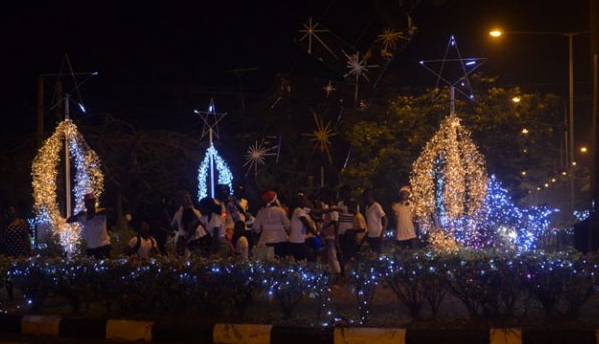 We are in a season of thanksgiving as the world races towards the anniversary of the birth of Jesus Christ, otherwise known as Christmas. For many in this part of the world, it is a rest period from the daily struggle that life has become. With or without salary, it is a time to spend money as children look forward to new clothes and accessories. It is also a time for family members to aggregate, and spend quality time together.

Christmas is for feasting. One of the joys in the years of yore was untrammelled feasting. Before rice completely ensnared Nigerians as a daily staple, it was a season to eat rice for days, instead of the Sunday-Sunday delicacy, it was. Back in those days, the feasting was from house to house, for children from a common Umunna. At every home, a bowl of rice will be downed before a few kobo is donated into the booty, to be shared later.

Then, there were dance troupes, crisscrossing each other as they visit homes to entertain and gain gifts from an appreciative audience. Amongst the most popular dance ensemble in my village, Amofia, Ogowfia Owa, were Ojionu and Adamma. Looking back, I wonder where those musical genres were learned from. For the adults, you had Obunoji and several musical groups from neighbouring villages that make up the town. I remember my father hosting Obunoji on a few occasions.

A host will provide food and drinks and some cash at the end to appreciate the great honour of hosting the foremost village masquerade. There were other communal musical groups and feasts at Christmas period which excites more if the moon shone, usually at the village square. With beach like sand in abundance, the children had the whole square to frolic, building castles, doing races and somersaulting with reckless abandon. The joy was unlimited.

Each Umunna making up the village will bring gourds of palm wine and in the later years, beer, which is shared freely. With liquor and food in abundance, the villagers bonded, amidst conviviality and commensality. Fear was anathema. Everybody knew and trusted each other. Stealing or robbery was unheard of. Of course, there were age grades keeping watch at the village frontiers, against invaders, but I cannot remember any incident.

Traveling, is an integral part of Christmas. It is a season to come together to share love with loved ones. While quite a number travel to joy centres, or overseas, many just head to the villages to spend time with the umunna. Where I come from, it is now a time for bazaar at the local church, meetings to discuss the community challenges, marriage, birth or death ceremonies, and of course the most popular festivity, the village league football, organised by the visiting youths.

Unlike before, modern children who still visit their neighbours are not interested in a bowl of rice or even meat. If you hesitate to celebrate the season for them, they will make a direct demand for money. With communal trust eroded, many families simply head to the town’s public space for common entertainments like football. Parents now warn their children to be mindful of where they visit and who they take any edible from.

Still Christmas, is time to share. Those who keep the village warm, especially the aged, expect that those visiting will bring some gift items, like clothes, uncooked food, drink and meat. Those with large hearts, kill cows, and invite the umunna to come and share. They buy drinks in large quantities and share. For the generous, it is a time for feasts, entertainment and music.

Those with smaller hearts, merely show off their big cars, raising dust in their trails. Because there are now regular security incidents, armed security are in the entourage of those in government and those who can afford it. Village and town meetings are now more rancorous, as communal lands have become economic assets, with some coveting them. Even heading the town unions have become contentious, as service is no longer the primary motive.

Some local and state governments now intervene in town unions as it has become a focal point for mobilizing votes. State governments now give direct funds to town unions, and that breads acrimony, as those in-charge determine how the funds are disbursed. In many big towns, the town union elections have become as contentious as those between political parties. A do or die affair, between contenders.

This time last year, I was already home with my siblings preparing for the burial of our mother, Ezinne Bernadette Uzodimma Amalu, which took place on December 21, 2016. Even though she died in September, we chose December to lay her to eternal rest principally because of the advantage of the holiday period. For us, having attained a ripe age of 86, the ceremony was an opportunity to give glory to God, for a life well lived.

Generous in giving, just like her late husband, Michael Ejiofor Amalu, my siblings and I have agreed to immortalise their memory by setting up a foundation: Michael and Bernadette Amalu Foundation, as a vehicle with which to imitate them. The focus will be in giving and providing opportunities to the less privileged, as much as we can afford, considering that we are of modest means. But as we all agreed, the more important consideration, is to have a generosity of spirit, not the magnitude of giving.

The six of us, with the support of our spouses, have agreed to make Christmas period our foundation anniversary. That way, while we will separately partake in the conviviality of the season with our families; our joint families will have opportunity to further bond together. So, as we celebrate the anniversary of the birth of Christ, we will also participate in family thanksgiving. With the addition of children and grandchildren, our numbers keep increasing.

Sometimes I have a sense of nostalgia for the 1970s and 80s, when I partook in those classical entertainment genres, of the Christmas period. A time when communal love was palpable. When it was fashionable to partake in commensality, a time when young stars were at liberty to traverse the village and neighbouring villages, in search of dance halls, without fear of molestation. A time when our uncles and aunties, doing regular jobs, could afford to buy Christmas clothes for all the young persons, in the Umunna. A time of dance and feast.

Unfortunately, those times are gone. We are now in a self-serving era. While earphones, Mp3 and similar gadgets have replaced dance groups, visual entertainment has displaced the real thing. But still, I clutch at a past, in retreat.

Merry Christmas and Happy New Year To You.

Continue Reading
You may also like...
Related Topics:Christmas, love, Season

Why Hijab Is Not Welcomed At The Call To Bar Ceremony – An Open Letter To Amasa Firdaus
Tithing Debate: Biblical Truth Vs Evidence