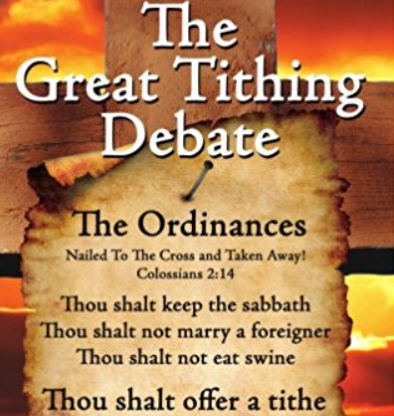 Profiling the Nigerian anti-tithe coalition is no mean task. For, it is a potpourri assembly comprising many non-Pentecostal Christians, old church reverends, adherents of such other faiths which consider Christianity a heresy against God, 24-carat atheists and people, who, frankly speaking, never cared about any public issue debate other than which of the P-Square brothers married the more beautiful wife.

Some say a number of Pentecostal church members as well are closet anti-tithers and were happy to assist outsiders who attempted to upset the ecclesiastical status quo. And so important was this task that such a diverse congregation put all differences aside to mass under the ministration of OAP Freeze, who ironically, was himself a Bible-quoting sort of alternative Daddy.

The task of profiling a tithe payer is nevertheless made easier; and for this, we have the anti-tithe heroes to express our gratitude. Tithe payers and offering givers, we were told, are a bunch of brainless, unemployed, underemployed, lazy, miracle-seeking idiots who have been brainwashed by pastors. Moreover, anti-tithing posts labelled those tithers with fat droppings as thieves, rogues, embezzlers and 419ers. Otherwise, where would they get the billions and hundreds of millions and thousands Naira and Dollar donations from? How do you buy a jet for a pastor in this broken country of beggarly peasants?

An anti-tither yields no inch. He takes no prisoners. To him, no Pentecostal church deserves credit for a minuscule grain of good works. In the language of the campaign therefore, no pastor was just a pastor. None at all. The unflattering prefixes qualifying the title are numerous. They are jet-flying, money grabbing, Gucci-sporting, miracle-faking, hell-bound, abracadabra, extortionist, corrupt, corruption-sponsoring and evil, auditorium freaks, to mention but a few. As if these were not enough to sink men’s souls, pastors were further debited as conniving with criminals in high places to wreak havoc on the country.

In the heat of the debate, Bible verses were rolled out to ‘prove beyond doubt’ that tithing is not only legalistic in the Christian setting, but a treasonable form of modern slavery. There were incontrovertible arguments about the foolishness of hungry, thirsty parishioners giving only to service jets of con artist spiritual daddies.

We had never seen a protest like it. The free airtime radio ministry of the alternative Daddy had enabled his liberating sermons to reach millions of lost Pentecostal souls and their hell bound Bishops. Whatsapp Avenue was littered with thousands of screenbills; and such was the sea of anti-tithe protesters at Facebook Square that you wondered if there were people left at Instagram Close to manage the life-saving business of snapping selfies.

Going through social media posts, newspaper opinions and reactions in the chat rooms, one was tempted to wonder: Where are the tithe payers and collectors to speak themselves? Has it become tiring for followers to defend the excesses of their General Overseers, Bishops,and Superintendents? Just muted voices, even from pastoral biggies, who responded with weak doses of Malachi.

Anti-tithers were emboldened. The message had obviously sunk in. Tithers, under the weight of undeniable, overwhelming theological summations, must have abandoned their leaders. The opposition gloated. Year 2017 will definitely be a meatless Christmas season in The House of God, they celebrated. Eat your heart out then, Prophet Malachi, you carnivorous minor prophet elevated to prominence by nigeria’s bloodsucking Pentecostal charlatans!

Then, enter the convention season. Will the pews be really empty this year in those money-grubbing auditoriums, or will they file out sheepishly like chained slaves to fill up the insatiable offering baskets? Baited breath all around….

And as they had done for many decades, as they still obediently do every Sunday, faithful worshippers filed into the safety of churches and convention grounds:
‘Here, we are safe. We are far far away from the siege of the spiritually ignorant and their daddy. We are encircled with walls of fire against the ungodly coalition of Persian kings…. How can they comprehend The Lord’s doing in our lives? What is money compared to the blessings that money cannot buy? Here we are, in this fortress, on these holy grounds, these hallowed temples, to give thanks and to receive much more from ‘Our own Daddy.’

The preachers poured in as well. Alpha males in own territories. Awe. Reverence. The spirit of Malachi pervaded the air. Alternative daddy’s personality would be starved of oxygen in this sanctified atmosphere. More Malachi. Why not? It has worked for many generations all over the world. Why abandon it now just because of a few self-appointed supermen circling to rescue the faithful? Who is a human super celebrity in the presence of archangels with the flaming sword?

Then the killer punch. More effective than the darling minor prophet. Testimony time! The naysayers may dig from Genesis to Revelation, but who can argue with results? Hard evidence is what we trade. Miraculous healing, pregnancies upon newborn babes, miracle jobs, a 31 times salary increase for a measly one year income pledge, and the dead receive life! Everyone is clapping. They are on their feet, claiming and tapping into.

Testimonies are followed by testimonies. We are Pentecostals. We love rhymes.
So, troop out they did, but not like shacked, fettered captives. Not once, not twice…. They danced, sang and rejoiced and they gave. Critics say they paid up, but that’s what critics are for. The grateful faithful were not only giving for what had been done and delivered. They did also for what was prophesied.

So, the results have tumbled in. Successful seminars and conferences all over; and we know the parameters of success. You can’t argue with God’s blessings. More people. More money. Dollar rain. New converts. Church leaders are smiling all the way. No. Not to the bank. Banks come to them in Nigeria. When they have to go to one, they fly. The itinerary is universal and the work is tedious….

In the tactics of theology versus evidence therefore, the latter has won hands down. Anti- tithers say the opposition’s victory is only in the short run. But I dare say if the war tactics remain unchanged, then the long run is already here.

When you call someone a brainless fool and expect him to follow your advise, look in the mirror.

Besides, you can abuse a political party leader and his followers will anoint you a hero. But this is religion. Different game. Different rules.

Christmas: A Season To Come Together & Share Love
How They Ruined Our Christmas