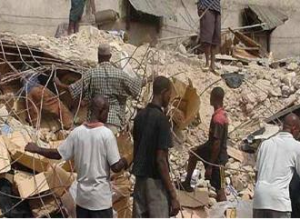 May 20, 2014 – Church Building Collapsed In Bayelsa During Heavy Rainfall, 20 Injured

At least 20 people were injured yesterday when an uncompleted church building collapsed during an heavy downpour in Agudama Epie, very close to Yenagoa in Bayelsa state.

An eyewitness told reporters that the uncompleted building belonged to the National Apostolic Church of Nigeria.

“We heard a loud sound which we thought was that of thunder. But it was the uncompleted building that collapsed, trapping many people under the rubbles,” he said.

The 20 people who got trapped underneath the rubble were rescued and taken to a nearby hospital for treatment.

One thought on “Church Building Collapsed In Bayelsa During Heavy Rainfall, 20 Injured”