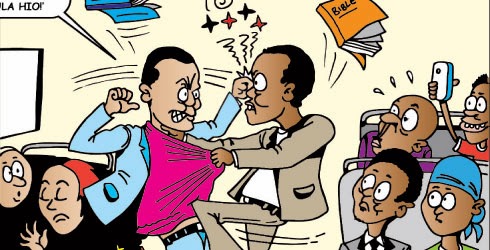 A 47-year-old Pastor in Gbongan headquarters of Ayedaade Local Government Area of Osun State, Julius Adepoju was yesterday ordered by an Osogbo Magistrate Court to be remanded in prison custody for allegedly killing a fellow pastor, Julius Oguntoye inside his church at Oke Ola area of the town.

Adepoju was alleged to have stabbed a co-pastor, Oguntoye, to death after an argument had ensued between them at the premises of the church.

The police prosecutor, Mr. Oladoye Joshua, a sergeant, told the court that the accused person used a knife to stab Oguntoye after an argument had ensued between them.

He informed the court that the two pastors had engaged in a fight over an issue before the accused person eventually stabbed the victim to death.

The prosecution maintained that the accused person was responsible for the death of Pastor Oguntoye, stressing that the offence was against the law of the land.

According to him, the accused person committed an offence contrary to and punishable under Section 319 (1) of the Criminal Code Cap 34 Vol. II, Law of Osun State of Nigeria, 2003.

However, counsel to the accused person, Mrs. Nnenna Ngwu, prayed the court to temper justice with mercy and grant his client bail in the most liberal term. But, the presiding magistrate, Mr. Adebayo Lasisi, in his ruling said the accused person committed a capital offence and ordered him to be remanded in Ilesha Prison.

The case was adjourned till March 7 for mention.