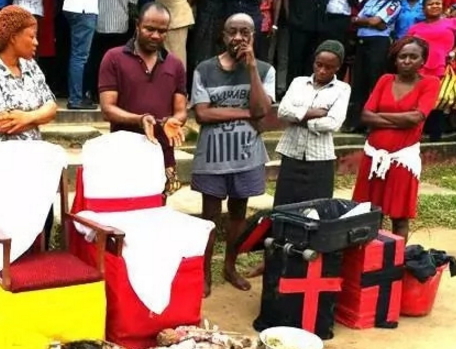 In the past year or so there has been an alarming increase in the number of ‘churches’ that double-up as fetish ritual dens.

Corpses are being discovered buried in the foundation of churches and several so-called pastors have been caught making human sacrifices.

A church is a place of worship and the priest or pastor is supposed to be the person who ministers to the people about the Bible and Christianity.

Churches are sprouting up almost on a daily basis as people seek miraculous cures and fortunes more than the Word of God. As there is no way to check most pastors qualifications or track records, you’re at their mercy. Everyone is busy trying to find more powerful pastors to help them fulfil their dreams and most rely on word-of-mouth or recommendation.

Everything in life is supply and demand: people want things to happen in their lives miraculously and crooked pastors are only willing to supply the demand. It’s very easy for a babalawo or fetish spiritualist to dress up as a pastor, complete with cassock and dog collar!

The only question is where do they get their ‘power’ from? Certainly not from God.

It’s very easy for a fetish priest to hide behind the façade of an innocent looking church which becomes a prop that hides their true purpose. There will be candles, Bibles and prayer books. Hymns will be sung, prayers said and a sermon read. All in all it looks like an innocent church ceremony.

But behind the scenes what is the pastor really doing to produce his ‘miracles’ or ‘prophecies’ on demand? Churches are not factories that mass produce miracles – it’s simply not possible!

A lot of pastors get their ‘power’ from a number of questionable sources : some go deep into the forest to consult the spirits of the trees and rocks, others seek ‘power’ from the entities of the deep ocean whilst others use human sacrifices.

Human sacrifice is as old as the human race and certain ‘gods’ and spirits will demand an offering to grant the user certain ‘powers’. By burying a sacrificed human being in the foundations of a ‘church’ not only is the victims’ soul trapped within the vicinity it’ll also be used to draw people in and for no reason they’ll feel compelled to go to that particular church like moths are drawn towards light. Over time more and more sacrifices will be demanded and one by one members of the congregation will begin to die mysteriously, their souls captured and used.

It’s not easy to spot such wayward ‘pastors’ as audibly they’ll be reciting texts from the Bible like they are saints, for the benefit of the congregation, but in their minds they’ll be chanting invocations to invoke the ‘gods’ they are really using.

But the people themselves are to blame: ‘miracles’ don’t happen everyday in a real church but rather once in a blue moon hence the reason they are called ‘miracles’.

After some people die and go to the afterlife they’ll have a heart attack ( – if it’s possible!) when they won’t find themselves where they expect to be after a lifetime of going to ‘church’; many will argue that they were ‘blessed’, ‘baptised’, ‘anointed’ and prayed for in ‘church’. The sad truth is a lot of people would have unwittingly sold their souls to whatever their ‘pastors’ was really worshipping. When you start asking your pastor for miracle-this and miracle –that, he or she will never tell you, honestly, what the conditions are for what you’re receiving or what you ask for – and most people, ignormous, won’t ask! You hand over your thick wad of Naira and you are told to come back in 7 days time to collect your soap, anointing oil or ‘holy water’. What’s in it you don’t know and you don’t ask.

And what’s to say your ‘pastor’ hasn’t got you in his sights for his next sacrifice to replenish the one buried under his church? How many people go missing in Nigeria every day and are never seen again?

Again I’m not saying all pastors are rogues and have dead bodies buried underneath their churches ; there are genuine pastors out there who have genuine places to worship and pray; it’s up to the worshipper to be more discerning. If there’s too many weird ‘miracles’ happening in a church there’s something else going on – either trickery or the ‘pastor’ has got a fetish temple hidden behind the altar! But yet again if you’re looking for this sort of ‘miracles’ or you want some of the pastors’ ‘power’ you only have yourself to blame for whatever you get yourself mixed up in.