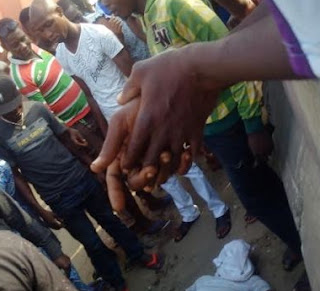 September 16, 2017 – Our Depraved Society: How Moral Corruption Is Turning Children Into Ritualism, Occultism & The Like

How Ritual Killing, Cultism & Kidnapping Have Spiked In Recent Years

A few days ago a rather chilling and disturbing video emerged, online, of a young teenage girl cradling a recently decapitated human head. On her own admission she was going into the bush to bury it and she had already killed two people herself.

Considering her young age it would be otherwise be difficult to believe she was capable of committing such a heinous crime. But seeing her holding the head confirms her guilt.

Now what sort of upbringing was she given by her parents or guardians that made her turn into a cold bloodied killer at such a young innocent age? How could a wicked person, like her, be in our midst and nobody saw what she was doing until it was too late? Presumable she didn’t go to Sunday or Koranic school where she would have been taught ‘thou shall not kill’ human beings. And how evil (- or what evil spirit lurks inside her) can a child like her be that would turn her into a cold-bloodied murderer? When I was her age even killing a chicken would be difficult for me let alone a human being.

And what is she killing for? Obviously it’s not for the fun of it, so either somebody paid her to do it or she herself wants to use the body parts for a ritual.

If a callous and evil person paid her to kill – and there’s no shortage of adults requiring ‘body parts’ – has the recruitment age for hired killers dropped so low that teenagers – even girls who barely have breasts – are now being recruited? I know there is widespread poverty, unemployment and lack of money to go to school and have three square meals but is killing a fellow human being, for ‘body parts’, for a few thousand Naira really the answer? Which ever way you look at it it’s murder punishable by a lengthy stay in prison or execution. It’s a good thing the security services caught this young serial killer before she went on to kill other people.

And if she wanted to use the ‘body parts’ herself was she planning on doing a money ritual? 95% of the time these money-making rituals don’t work and why is a young teenager doing such in the first place? What does she want to do with all that kind of money anyway? Since we live in a society where everybody wants to get rich quick, by whatever means possible, it’s not surprising – live fast die young! Whatever happened to working hard, speculating and accumulating? I suppose that is too tiring since every kid coming out of its mother’s womb today wants to be rich and famous tomorrow – minus any hard work.

Ritual killings have spiked in recent years and the way area boys, cultists, kidnappers, assassins and now this young female serial killer are killing people the country’s population will be decimated in no time, no need to worry about enforcing birth control!

Again the whole of society has to share the blame in creating these little monsters: a young person will think if an adult can get away with killing indiscriminately why can’t they? How many murders are solved by the police and how many people are brought to justice?

Society doesn’t seem to be worried that a majority of these killers are getting younger by the day despite the fact it’s an epidemic in the making. Who put the idea into their heads that it’s alright to be a killer when they’re barely out of diapers? And shouldn’t so-called religious leaders being doing more to educate about the dangers and evil of taking a life? And what about the parents or guardians? They say charity begins at home.

How could the parents of this teenage serial killer not know she was a murderer? Were they so busy with their lives that they didn’t know what she was getting up to? These sort of questions is what society needs to ask itself : how many parents know what their children really get up to? And if they do know, do they care? Having a son or daughter who’s a murderer is not fashionable, it brings shame upon the family. I’m not an advocate of ‘jungle justice’ but how would a parent feel if their wayward child is lynched in public?

It’s time parents become a bit more responsible and took proper care of their children. If you don’t raise them properly, discipline them when necessary and teach them about the evils of this world – especially about messing about with cultism and occultism – they’ll turn out to be vagabonds and murderers.

And to all the cold-bloodied murderers, out there, young and old, if you shed the blood of an innocent person you’ll pay for it in this world and the next. There is no hiding place!

When Churches Become Fetish Ritual Dens
America’s Mad Obsession With Guns: Why Firearms Ownership Should Be Limited To Security Agencies