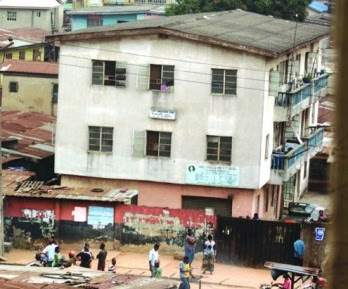 The wife of one Mr Okereke, a medical director at Convalescent Clinic in Ketu Lagos is yet to come to term with the sudden suicide death of her husband.

In the early hours of today, the body of the aforementioned clinic medical director was found dangling from the ceiling fan in one of the rooms of their 2-storey building.

Mr Okereke’s death was ruled suspicious since he didn’t leave any suicide note behind.

One of the area residents said he woke up this morning and heard people crying from the clinic and on getting there, he found the wife of late Okereke weeping bitterly.

She eventually told everyone how her hubby’s body was discovered dangling from the ceiling on Friday morning.

According to Okereke’s wife, they both slept together in one of their rooms but when she noticed that the deceased was no longer with her, she decided to check in the vacant rooms.

The late medical director was previously married to a woman for 10 years without a child.

The marriage later ended in divorce before he married another wife.

The deceased left behind a boy and a girl.

Convalescent Medical clinic is located at no 13 Aliu Street in Ketu, Lagos