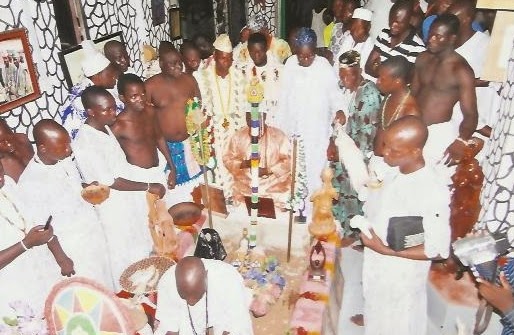 His desperation to acquire wealth pushed him to join the Ogboni confraternity but 15 years after his initiation into the cult, Chris Obi realized he could only get what he wanted so badly if he surrenders that which is dear to him, his first son.

Now 54 years old, Obi who is based in Onitsha, Anambra State is bitter that he has lost 15 of his early years in search of wealth where nothing is given free. His decision to quit the secret society has not helped as he claimed that leaders of the group have been all out to destroy him.

Not ready to keep sealed lips, Obi, who was once a machine operator with a firm in Onitsha before turning to merchandise, told Saturday Sun that sweet story of wealth by his friends who are members of the group encouraged him to stake all he has to join.

According to him: “I joined Ogboni because I wanted to be very rich. I was deceived by friends. But I was in it for 15 years without getting any riches. I was only dining with the high and mighty. They were only feeding me. Whenever we go for meetings, which we call club meetings, I used to eat sumptuous meals and drink so much. That would make me happy but once I come back home, I became sad because I was still poor and couldn’t feed my family.

“Before I was accepted to join the society, I was registered. I even paid a registration fee. It was about N75,000 that I paid before they gave me a form to fill. I was asked to supply some personal information in the form. Such information included the names of my first born, my wife, my relatives and my age, among others.

“We were also asked to pay for certain things such as gadgets, they cost N30,000 but I paid only N20,000. I got the money from my contribution in the firm I was working before I joined the society.

After filling the form, they gave a date for my initiation into the society.”

While giving account of his initiation into the cult, Obi said he was given a blood-like liquid in a calabash to drink as a mark that he would keep the secrets of the society, which he is now determined to break and damn the consequence. “At the initiation venue, they provided a coffin, covered with a black cloth. I was also given a ring and an handkerchief among other things I can’t mention here. There were traditional priests who presided over the initiation. I remember the priests shouted some incantations which I later understood were warnings for me that what I was joining wasn’t a child’s play.

After that, they put the ring into my hand and said that it was a covenant that demands that I keep sealed lips about the activities of the society. I was also given some liquid in a calabash to drink; the liquid looked like red wine, but it was very red. I cannot really say how it tasted. We were many that were initiated that day and we all drank the red liquid.

When we had taken the drink, we were congratulated and welcomed to the society with huge promises that we would get all the riches and the powers that we desired. I went home that day feeling on top of the world. I was excited that I have found a smart way to be come very rich”, he stated.

To reassure himself that he was on the right path, Obi would use some of the magical powers given him through rings and handkerchief. He explained: “The ring that I was given could be described as both magical and fetish. I was told that I could just disappear in the face of danger if I wore it. But it didn’t make me to disappear at any time. Actually, I never got myself into trouble with anyone because all I wanted was to be very rich.

So, I did my best to stay out of trouble. The handkerchief did remarkable things for me. With it I hypnotized people to do my bidding. For instance, I was able to pay far less than what I bought from sellers whenever I went to the market to buy things. I could buy things and ensure my bags are full with foodstuffs and other things with just N1,000 and I even get some balance from the sellers. The handkerchief enables me to cheat sellers by getting them hypnotized.”

Not satisfied with those little benefits from the magical powers given him, frustration began to set in when he could not understand what he would do to get the real wealth he needed. According to him, “there was no time I was categorically told how to make wealth or get riches but each time I asked them when it would happen, they would tell me that I should just continue to attend the meetings and make effort to get deeper and know more about the society. They said that in due course I would find out how to get riches. So, I carried on with them, with the hope that one day, they would reveal to me how to become rich indeed.”

The beginning of the end, however, began when, on further inquiry on how to get the desired wealth, he was told that he had to sacrifice his first son. In his narration, he said “something happened about six years ago which made me have a second thought about the society and desired to take a walk from them.

I ran into a member of the society with whom I had been initiated the same time. That means we were at the same level in the society. I knew the man to be as wretched as a church rat before our initiation. But when I met him in 2008, he had become stupendously rich. He rode a very expensive car and I envied him.

He took me to a big restaurant in Onitsha metropolis and there he bought me sumptuous meal and drinks worth thousands of naira. When we got talking, he told me about how rich he had become. He said that he had built a business empire for himself and dealt with white men in Hong Kong. The man took me to one of his firms where he prints many fake documents for several business transactions. He said he wouldn’t get caught because of his connections with the society.

When I asked him how he struck it rich, that was when he dropped the bombshell, saying that he had to sacrifice his first son. He said that thereafter, he continued to kill his other unborn male children from his wife. He said that whenever his wife was pregnant and was about to give birth, he would find out the sex of the baby and if it turns out to be a male, he would use his powers to kill the baby before it would be delivered.”

The confession of his colleague dropped the scale from his eyes and then it dawned on him that he needed to take a decision to proceed and do likewise or take a walk. He eventually chose the latter.

According to Obi: “I was shocked at what he said. He added that he had built houses both at Onitsha and his village. His confession opened my eyes to what I was supposed to do to get riches. It became crystal clear to me that the society expects me to also sacrifice my first son to become rich and I shuddered at the thought of it. I love my family so much. They are all I have in the world.

In fact, I wanted to get rich quick so as to give my family the best in life but it was the same family that was being demanded as sacrifice for the riches. Suddenly, I began to realize that I was foolish to have accepted to join the cult for riches. I regretted heeding the advice from my friends who lured me into it. My friends, particularly the one who was the general secretary of the society, had deceived me with great promises of wealth, they had even told me that they saw my father’s name in the Ogboni membership list when they were checking the names of past late members. But the scales fell off my eyes with what I discovered from my colleague who sacrificed his children.”

From that point, he chose to draw the battle line with a group he had served for 15 years. “Suddenly, I began to hate the society. I couldn’t make myself to attend the meetings again and I began to burn the fetish items they gave me. After a few days that they didn’t see me at the meetings, they sent that my rich friend to me.

He came to ask why I was being absent at meetings and I told him that if the only way for me to get riches is to sacrifice my family, I was opting out. He looked angry when I told him that and warned me against the consequences of quitting the society. A series of persuasions and threats followed for sometime so as to make me change my mind but I stood my ground and drew closer to God and was praying fervently.

After a while, I thought they would let me be. But they told me through their delegation that they wanted to leave me because I had not got riches through them. They added that my soul would have been demanded by them if I had got riches before quitting. That means they would have killed me and captured my soul as punishment.”

He said at the point he was almost relaxing it was all over, the cult struck. “I thought they had gone out of my life forever when they said this, little did I know that they were actually planning to get rid of me gradually. Later that year, 2008, I had a minor accident and it got my legs swollen. And the legs continued to swell the more.

It defied all kinds of treatment I sought for it. In fact, I attended many churches for a miracle of healing. I paid tithes, huge offerings and even bought things for the churches but nothing happened until last year January when I attended the crusade of the Lord’s Chosen Charismatic Revival Ministries at Mgbidi where I eventually got my deliverance from their attack”, Obi stated with a sigh of relief.