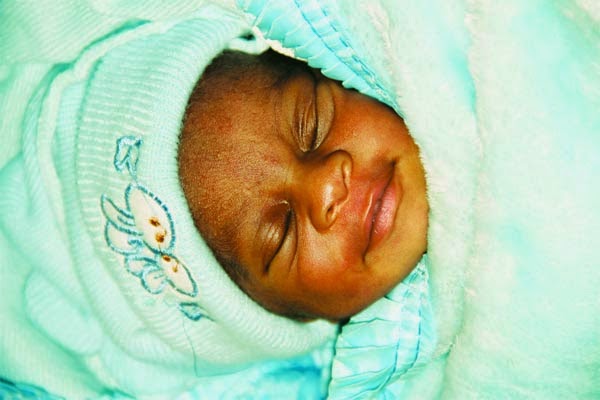 A 52-year-old woman in Ezinihitte Mbaise Lo­cal Government Area, Imo State, Mrs. Tina Iwuji, alleged to have done an abominable thing by arranging the sale of the baby of her son’s girlfriend, is now gnashing her teeth in the custody of the Imo State Police Command.

The two-week-old baby girl was allegedly sold for the sum of N350,000 to another wom­an, Bernadine Abara, who claimed to be in need of a girl to complement her three sons.

The whole sordid affair began when Iwuji’s son, Emeka, who resides in Lagos impregnated the mother of the baby, Esther Godwin, a native of Ndoki, Delta State and then sent her to be with his mother in Mbaise. Both Emeka and Esther never disclosed to the woman that her son was responsible for the pregnancy.

Perhaps worried as a dili­gent mother ought to be, Tina inquired from Esther whether her mother was aware of her pregnancy and her presence in her house in Mbaise.

Recalling that conversation, Tina said : “It was my son Emeka Iwuji who brought Esther as a friend not a wife from Lagos to my home in Mbaise, Imo State. I asked Esther who was responsible for her pregnancy and she said it was not my son. I asked her what was her mission and whether her mother was aware that she came to Mbaise but she said no. She came to the house on January 7, 2014.

Confirming this to Sunday Sun in an interview, Esther said: “My husband, Emeka, impregnated me in Lagos and took me to his family house in Mbaise, Imo State. I didn’t tell his mother that he was re­sponsible for the pregnancy.”

According to Imo State Police Commissioner, Mr Abdulmajid , Esther delivered a baby girl on April 11, 2014 at Hope Clinic and Maternity, Mbaise. Hearing that Esther had safely delivered the baby, Emeka allegedly called his mother on the phone and instructed that she should ar­range for the sale of the baby and the money realized be giv­en to Esther to enable her to continue with her education in Lagos State.

Subsequently Tina began pressuring Esther to submit to the evil intent of selling the baby to an adoption syndicate operating in the area, as con­firmed to Sunday Sun in these words: “When I delivered, my husband told his mother that she should sell the baby girl and give me the money to go back to Lagos. My mother-in-law was desperate to sell the baby girl.”

At this point, a nurse who is part of the baby adoption/ sales syndicate, Eunice Eze came into the picture and in­vited another woman, Patricia Njoku, who identified a willing buyer, Mrs Benardine Abara.

With all arrangements in place, the sticking point was the unwillingness of Esther to agree to the evil design against her baby. To effect their plan, Tina allegedly ordered her younger broth­er, Nicholas Imoh to convey Esther to a certain place. Somewhere along the way, on Oparache road, Aboh Mbaise LGA, he stopped and forcefully took the baby away from Esther and handed it over to Patricia, who took the baby to Nurse Eze for onward delivery to Bernardine, who claimed to be in need of a baby girl and paid N350,000 for the baby.

In tears, Esther rushed to the Mbaise police station to report the case. Policemen quickly moved and arrested the alleged culprits and also recovered the baby.

It was during police in­terrogation that Tina learnt that her son was responsible for Esther’s pregnancy. With visible agony, she said: “It was when I was arrested with the other people that Esther confessed that my son Emeka was responsible for her preg­nancy. I was shocked.”

On her part, Bernardine acknowledged buying the baby that was brought to her house but, however, said she was not aware that it was stolen from the mother. She said: “I have three boys and I needed a female baby. I paid N350,000 and she was handed over to me by Nurse Eunice Eze. They gave me the baby on April 13, 2014 around 6.00pm. The following day, policemen came to arrest me in my house. They (Nurse Eze and the others) had told me earlier that the adoption was perfected.”

All the people involved are now waiting to tell their stories in court.