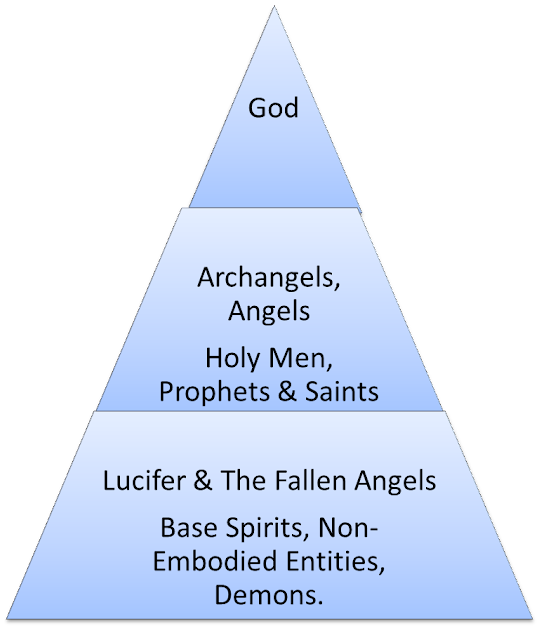 The Limitations Of Black Magic, An Opinion Article By Tony Ogunlowo

Nowadays a lot of people are turning to black magic in order to achieve all kinds of evil and selfish purposes – controlling or doing harm to people, accumulating wealth, and promotion at work or to become famous – and this invariably involves spell casting, sacrifices and the consultation of entities and deities of questionable nature.

No good comes out of the usage of black magic as it upsets the natural balance of things; it’s cheating nature, the universe, and people’s destiny and even, perhaps, the destiny of a locality such as a country. Any individual using black magic can be assured that whatever evil they do or send out will make them subject to the Rule of Three law which is to say whatever evil you do will come back to you three-fold.

For those who mess around with black magic and are probably unaware of what they are doing let them me illustrate with the pyramid of universal power below:

All power comes from God (this can also translate to mean God the Father, God the Son and God the Holy Ghost) and he’s at the peak of the pyramid. Following closely on the next rung are the Archangels, Angels, Holy Men, Prophets (- not self-proclaimed prophets!) and Saints.

At the base of the pyramid comes Lucifer and his legion of fallen angels, base spirits, non-embodied entities and demons – the lowest of the universal power structure – which, unfortunately, are what humans contact when using black magic.

Now because all these evil base spirits in the lower section don’t have ultimate power like God they tend to trick people into achieving their own diabolical desires. They always demand something in return for giving people ‘power’ they request. They don’t do anything for free! They’ll always want something in return which can involve anything from paying homage to them, wearing of clothes of a certain colour, periodic ritual offerings and so on. Failure to follow their instructions to the letter and the individual will incur their wrath – how many people have died or gone mad because they disobeyed instructions given to them?

And talking of sacrifices – and I’m not talking about sacrificing a goat or a chicken here – a human sacrifice! People who seek high office or wealth are known to use human sacrifices to achieve their aims. A human soul is created by God, something Lucifer and all the base spirits or any Man can re-create. In doing so one incurs the direct wrath of God (- thou shalt not kill!) and the repercussions are severe. The punishment for the individual can range from incurring a generational curse on his family from God to the banishment of their own soul when they die. In most cases such people begin to pay for their crimes before they even die, for instance how many rich people (of questionable wealth) or politicians suddenly lose ( to death) the one thing – wife, son, daughter, etc – he or she loves the most? When using evil spirits or black magic you never know what’s in the small print – what you tend to lose to obtain what you want- and you’ll never be told!

Now to use black magic people need to go to somebody who practises it – babalawo, witchdoctor, a witch or somebody who is knowledgeable about it – and they go to them under the pretence they are very ‘powerful’. The truth is no babalawo knows how powerful he is. He will claim he is but he doesn’t know. In the absence of a universal system that will denote whether he has a ‘diploma’, ‘BSc’, ‘MSc’ or ‘PhD’ in witchcraft and black magic you can only take his word for how powerful he claims to be; he’ll be knowledgeable in some areas but not all and hence the reason why people go from one place to another seeking a more powerful practitioner.

So if you do juju with one babalawo there’s the possibility a more powerful babalawo up the road can unravel it. So you’ll forever be going from one babalawo to another seeking the more powerful one. Unfortunately there aren’t any as all witches and witchdoctors, themselves, will admit that all power comes from God.

Opinion: Why Do Nigerian Leaders Take Oath Of Office Without Fulfilling Their Promise?
Christmas: The King, His Message And Us – By Albert Afeso Akanbi