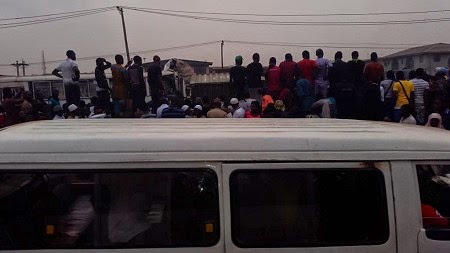 A fatal car accident in Ketu area of Lagos today killed 4 people including a baby.

The container reportedly fell from a trailer that lost control while trying to manoueuvre its way from parked commercial buses picking up passengers on the highway.

One Olabisi who witnessed the tragedy said it happened while drivers were arguing over who hit each other.

A nursing mother with a baby strapped to her back was among those killed in the fatal accident.

The accident which was described to be is a severe, triggered a serious traffic gridlock, forcing motorists to take alternative route.