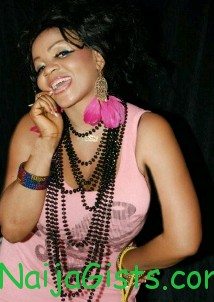 You might have come across the story making round about Nollywood actress Cossy Orjiakor‘s plan to insure her front asset for a whopping 1.6 million American dollars, an equivalent of 256 Million Nigerian naira.

According to a reliable source, all they’re showcasing is her huge frontal assets with her face changed in order to hide her identity from the public.

This is the same company that insured playboy models Pamela Anderson and Dolly Parton.

In few weeks time, Cossy Orjiakor will be traveling to Los Angeles to officially finalize her career deal.

As part of the deal awaiting her signature, there will be limits on how many men and women who would touch her bosoms each month. Also, the bosoms have all been given names and must now be treated as people in future movie roles. That means that Enhanced Silicon Inc. will determine how much a movie producer will pay each bosom for an appearance in a movie. “The downside of the deal is that I may get dressed‘, Cossy added.

Cossy Orjiakor is very happy to kick start her career. Sources claim that each of Cossy’ breasts will be named and anyone who prefers to touch will have to pay for it just as Enhanced Silicon Inc. will henceforth, decide the amount producers will pay per breast, for appearance in a movie.

Expect Cossy Orjiakor to debunk the story in order to cover up her plans.