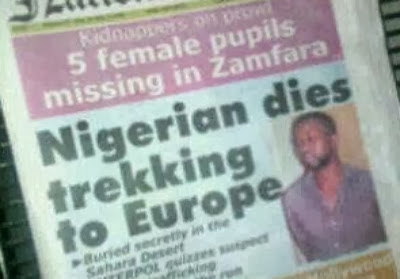 Oct 10, 2013 – Cries Of African Migrants: How Nigerians Risk Their Lives In Europe & Overseas

I was deeply saddened to hear of the crash of a plane carrying 20 people shortly after take-off from Lagos airport in Nigeria. The Associated Airlines plane was bound for Akure, which lies about 140 miles (225km) north-east of Lagos that Thursday morning. It was indeed a breaking news that was heartbreaking. I felt pain in my heart because i know what the pain of losing a loved one is, even though i don’t know those that were involved. I was still reeling from the loss of life in the air mishap, little did i know that another disaster has equally happened.

A boat crammed with about  500 African migrants has just capsized. About 111 dead bodies have been found, 155 people have been pulled out alive, but more than 200  are said to be trapped in the dreaded Mediterranean sea. Among the dead bodies that were brought ashore were three children and two pregnant women. At dawn, there were some sort of awful scene as those bodies from the sea were almost all naked or bare-chested, as they stripped down to remain afloat,still they could not make it. Majority of those who perished were from war ravaged countries viz, Somali, Eritrea and some fraction of  sub Saharan African countries.

Where I am based in Europe, A Nigerian was wailing and crying because he received a phone call from Libya that his younger brother was in the boat that sank. We told him not to conclude yet that his brother might be among those that survived. No amount of words could make him stop crying. However, it has been confirmed that his brother was among the dead because his friend that succeeded  has called home and informed their family about the incident.

According to a survivor, The 20m (66ft) boat began taking on water when its motor stopped working as it was approaching Lampedusa-a tiny Italian island on Thursday morning. To attract the attention of passing ships someone in the boat set fire on a blanket only to have the fire spread to the rest of the boat. The vessel began to sink when everyone moved to one side. This is the worst ever Mediterranean refugee tragedy in recent time. Previously, in 1996 also in the Italian coast a migrant boat cap-sized with 283 lives lost. On the subject of known ship wreck, more than 25,000 people have died trying to reach Italy from North Africa, and when you add that of Morocco to Spain the number could double. In July 2008, a Nigerian man aged 30 narrated how he threw his two children overboard after they died of starvation and dehydration in a migrant boat that was bound for Italy.

In my previous article titled “How Nigerian Girls Are Forced Into Prostitution Through Satanic Initiation And Blood Covenant” which you can find on NaijaGists.com, i made mention of the trend in which human trafficking trade has plunged into. Now it is all about ritual and voodooism. Sacrifices are made even with human blood to make their business prosperous. Sometime ago some traffickers flung 12 human sacrifice from their boat in a voodoo ritual in other to calm stormy sea. The victims were human being like them, those who left their respective family back home. A witness and a survivor gave Police an horrific account of how human “sacrifices” were picked by the Nigerian “Captain” from a ship that has 400 on board after the engine failed. Some of the voodoo ladies were  performing a macabre dance before the victims were flung into the sea to calm the sea and appease the devil. Human trafficking is really thriving and those in the trade have a well co-ordinated network, a nexus that runs from Nigeria to North Africa through sub Sahara Africa and then to Europe. The migrants are compelled to pay the sum which ranges from $1000 – $2000 dollars before they push them into the boat to Europe.

Despite the news everywhere about the dangers of traveling to Europe by desert, you would still find Nigerians taking this great risk just to fulfill their dream of coming to Europe where they think that  one can pick money from the street. Many have met their Waterloo in this treacherous journey which is often fruitless. Statistically only about 45% have succeeded. Many have died without the knowledge of their parents and their dead bodies have become food to the fishes in the sea.

The fishermen in the Mediterranean coast are complaining about the decline in their business because the high number of dead bodies in the sea is obstructing their net. There is a woman who hasn’t heard from the son who left home 8 years ago. She still believes that her son would return home someday.

Whenever she hear that someone has just returned from oversea, she would go and look for the person and ask him or her about her son. “Abeg you see my pikin? Osamudiame.” That is what she always ask. I pity the poor woman and i pray that her son should still be alive. Our people do say that a dead person is far better than a lost one.

Life in Europe is no longer rosy, Italy as a country is having a great challenge. There is no job. Unemployment is a major concern. Most Nigerians are begging to survive, those that are ashamed of begging are in the streets selling drugs. If they are caught they will be sent to jail. The lazy ones attach themselves to the ladies that prostitute. The lady feed and cloth the “fine bobo” from what she gets from her prostitution business. Any guy who cannot perform well on bed with these ladies are ineligible in the clique.

It is good to note that as soon as a migrant enters the shore of Italy he or she would be taken to a reception center and his or her details would be taken including the “finger print” which will make it impossible for any migrant to leave Italy to any other European country because once your finger print is seen in the European centralized system you would be returned back to Italy. I have seen many Nigerians who were doing fine back home in Europe moving from one country to another without any headway. He that has ear let him hear.

18 thoughts on “Cries Of African Migrants: How Nigerians Die Daily In Europe & Overseas”