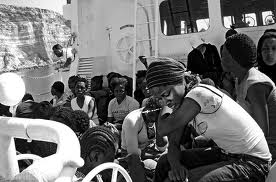 June 14, 2013 – Nigerian Ladies Are Forced Into Prostitution Daily – How To Tackle The Evil Trade Of Human Trafficking

We say that slavery has varnished from European civilization, but this is not true. Slavery still exist, but now it applies only to women and it’s name is prostitution……Victor Hugo, a French novelist of the 19Th century who wrote the book, “Les Miserable”.
Prostitution is referred as the oldest profession. Prostitution not only destroys lives,marriages, families and society, but it destroys the spirit and soul in a way that leads to physical and spiritual death.

About 80% of women that are been exploited as sexual slaves are victims of human trafficking. According to a UN report, 2.4 million people across the globe are victims of human trafficking at any point in time. Trafficking is modern slavery and a violation of human right. It is a lucrative industry and it is regarded as the biggest organized crime in the world, after illegal dealing of drugs and weapons. Many of the ladies that are into prostitution were either coaxed or forced into it. Some of the victims are compelled to carter between 10-15 clients per day. Most often the use of sexual protection is negligible. The victims are at a high risk of contracting various sexually transmitted diseases and HIV/AIDS that they further pass on to the men and then their partners.

Recently, a 30 year old Nigerian lady by the name Jessica was found dead few weeks ago in the industrial area of  Carinaro and Gricignamo in theCaserta province of Italy. According to her friends, they said she left home in the night for work(prostitution), they expected her to return in the morning,but only to hear that she has been strangled to death. She was left unclad by her killer. I developed moist eye while reading the gory story. Last year, another victim of human trafficking was equally murdered in the same circumstances by unknown men in Rome. Her ankles were tied and she was strangled to death with a black cord tied around her neck. What a sad end. The human trafficking network has connection with mafias and those involved in the trade are heartless. The evil trade has plunged into a more diabolic trend. Voodooism has crept into it. The victims(Trafficked Persons) are forced to swear an oat of trust and loyalty at the shrine in the presence of a diabolic priest.

Some may have mark on their skin. The purpose of this satanic initiation/covenant is for the trafficked person not to be able to escape when she might have gotten to Europe or their preferred destination. To make the bond more secure, the trafficked person would be asked to either leave behind some portion of hair from her armpit, or that of her private part and in some cases pant/underwear used during menses that has blood stain on it. The item would be deposited on the shrine,or the trafficker-Italian Mama(as they are commonly called) would have to keep it.

The truth is that any lady who had gone through this ordeal would find it difficult to go off their hook except a real deliverance is conducted The young ladies are compelled to reimburse outrageous sum of money which varies from 30,000-50,000 Euros. They claim that the sum is what they spent in the course of bringing the lady to Europe. In this scenario, the young girl would be exploited for years in other to be free. This is sheer wickedness and only God would judge everyone of them.

Many of these ladies, are affiliated to one church back home. They have pastors and prophets who pray for them to be successful in their chosen profession of self destruction. They have polluted the house of God with their wealth. A real man of God will not have anything to do with the act of whoredom.

These pastors feed and cloth themselves from what they get from the ladies. Any church whose mandate is not to save the lost is nothing but a lost church. Deuteronomy chapter 23 v 17-23 says; “None of the daughters of Israel shall be a cult prostitute, and none of the sons of Israel shall be a cult prostitute.You shall not bring the fee of a prostitute or the wages of a dog into the house of the Lord your God in payment for any vow, for both of these are an abomination to the Lord your God.

Those of them who doesn’t believe in the pastors resort to native doctors and fetish priest, who performs sacrifices for them. Those of the women who has money and the relevant document go at length in  inviting their native doctors to Europe. There was a time alarm was raised because sacrifices made on earthen pot called Uzobo in benin dialect were seen in some streets in Italy, most especially Napoli which has become a cesspool of all manner of crime due to its proximity to the Mediterranean.When you are in Napoli it is as if you are in Nigeria.

Today, about 60% of the new houses you find in Edo State are those built by these ladies. They are celebrated in their respective families and they command respect even from their parents.They have become the nouveau riche, the bread winners of their family .Getting a man to marry it not a big deal to them because their wealth will attract men who are lazy,who will end up becoming the wife instead of husband. This is a taboo in my culture. From the place where i hail from ,any lady whose travel to the oversea was not for study, when she returns she would be regarded as Osu, an outcast. It would be assumed that she has gone there for prostitution.

And no man would want to have anything to do with her. Please don’t see it as if i hate the Edo people, i love them with a passion and i don’t have biased mind towards them. In a complex situation like this, we shouldn’t be economical with the truth. Obviously, there is no tribe in Nigeria where you wouldn’t find prostitutes.

Due to public awareness of the menace of been trafficked, more also the city has been bereft of their priceless jewels. The traffickers now to go villages to recruit young and naive girls. In some cases it is against the will of the young girl but due to parental pressure,because they want her to go and make money for them she would have no other choice than to succumb to the sugar coated tongue of the trafficker who must have promised her a high flying job oversea. In Libya, what most dirt bag that call themselves big boys did was despicable.

They will bring young girls into the country and then sell them to their fellow compatriots that has brothel(Connection House). The ladies are called ” Printing Machines”.There was a time it became a de rigueur, parents who don’t have their daughter oversea was regarded as “old school” people. A good number of these ladies are stranded and frustrated in African poorest countries like Mali, Burkina Faso, Niger etc. Many have died in the dread Sahara desert while others in the Sea, without the knowledge of their families. Some parents are still waiting to hear from their daughter who left home years ago and they hope she would return home someday.The wife of the former governor of the state, Mrs Eki Igbinedion wasn’t happy with the way the image of the state was been tarnished by these ladies in Europe.

In other to checkmate the activities of human trafficking in the state Idia Renaissance was established. Through her, many of the ladies were deported back home from Spain and Italy and they were integrated into the center where they had a free vocational training. She even wanted the State House of Assembly then to pass a law that would prohibit prostitution. Her benevolent gesture was condemned. Many of the parents of these ladies were against her,she became their enemy just because they wanted their daughter to remain in Europe and make money for them via prostitution.

For our country to be good, we as individual have to show example first. It is a cliché to say that charity begins at home, but it is still true.

About the author:Mr Uchechukwu Caleb Obi,  Social critic based in Europe    uchechukwuobi@yahoo.com