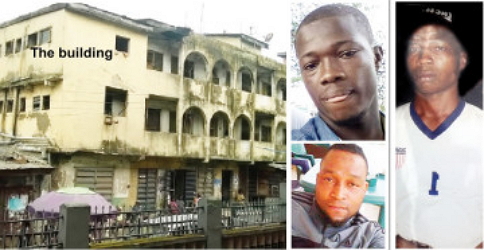 Suspected cultists working for a political party in Lagos State, have killed five people in the Ajah area of the state.

We learnt that the victims were coming from a naming ceremony when the men waylaid, and opened fire on their bus.

The killer gang was also said to have entered the vehicle and used cutlasses and knives to slit the throats of some of the occupants.

The deceased were identified as Ganiyu Lawal, aka Ebe; Idris Kolapo; Samsudeen Osoja, aka Songa; Rafiu, aka Ralph; and Ladi.

A source said Songa’s head was cut off during the attack on Wednesday.

Metro learnt that five others, who sustained injuries during the onslaught, escaped by a whisker.

The matter was reported at the Ajiwe police station.

Investigations by Metro revealed that the deceased and survivors were working with the Chairman of the National Union of Road Transport Workers, Oyebanji branch, Lagos Island, Alhaji Mustapha Adekunle (aka Seego).

When our correspondents visited Okepopo Street, Lagos Island, where the deceased had their base, there was palpable tension in the community.

Houses belonging to the Olokodana family on Palm Church Street were torched by the miscreants.

Also, a building and a lock-up shop belonging to one Tunde, aka Alabi Yellow, who was alleged to be an informant of the gang, was invaded by the hoodlums who burnt some of the property.

Our correspondents saw damaged cartons of soft drinks, fruit juices and canned malts on the floor of the shop.

A resident, who spoke on condition of anonymity, said trouble started on Sunday when Seego and the leader of a rival gang, Tunde (Alabi Yellow), met at a social gathering, where Seego asked Yellow to bow to him.

It was gathered that Seego ordered his boys to deal with Yellow by breaking a bottle on his head.

The source said, “We have factions and unions on the Lagos Island and they usually engage one another in superiority clashes. Two people were killed during the electioneering period as the political parties polarised them.

“The rivalry was later settled after Ambode won the election. A man, popularly called Seego, later came to the area for a social function. During the event, he sighted Yellow and asked him to bow to him. When the latter refused, he became angry and ordered his boys to deal with him.

“Yellow was beaten and his clothes torn by Songa, who works for Seego.”

Another source, Pepe John, said Yellow left and promised to revenge the assault and disgrace on his person.

He said, “On Wednesday, the wife of one of the boys in Ajah had a naming ceremony and about 10 guys from Okepopo went there to party.

“As they left after the party, a group of boys shot at their vehicle. They entered the bus and started slashing their throats.”

A source said the attackers cut off the head of Samsudeen (Songa), who allegedly smashed a bottle on Yellow’s head at a social gathering.

He said they took the head away with them, but left the other corpses.

Our correspondents were told that one of those hit, Tope Bullet, escaped because the attackers thought he was dead. A few other persons were also said to have escaped.

It was gathered that the survivors returned to their base and reported to their colleagues what befell them.

A resident, John Otombo, said more than 100 hoodlums invaded the street on Thursday, searching for the men for their alleged involvement in the killings.

He said they headed for the Olokodana family house, and set some property there on fire.

He said, “They came to the family house around 10am. They shot into the air. They didn’t meet anybody in the house. So, they took some valuables and set them on fire.

“They went to Yellow’s wife’s shop and brought out all the goods there. They damaged them and went to the house and set their household furniture and property on fire.”

Traders on Odunfa, Onola, Oyebanji, Adeniji Adele, Evans, Atiko and adjacent streets were seen packing their goods and locking up their shops.

A tailor, who spoke with PUNCH Metro on condition of anonymity, said they lived in fear.

She said, “They said they would come back and burn down our houses. We are living in fear. We just want the government to clear all these street gangs.”

A trader, who did not identify herself, blamed security agents for being slack in responding to their distress calls.

“It was after the hoodlums had destroyed things that the police came today (Thursday). The unfortunate part of the story is that they started arresting innocent people,” she said.

A tricycle driver, who also did not identify himself, told our correspondents he would not be sleeping in his house.

He, however, said only two people died.

He said, “Armed hoodlums shot at a moving vehicle and two persons were fatally injured, while three others sustained injuries.”

The Lagos State Chairman of the NURTW, Chief Tajudeen Agbede, said he was aware of the incident, adding that it did not happen in any motor park.

He said, “The police are already involved in this case. What I always tell our members is to mind their public conduct and not bring disgrace to the union. Whenever anything like this happen outside the motor parks, I choose not to comment.”