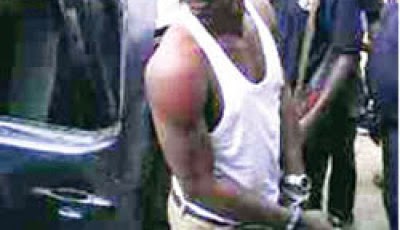 A custom officer who reportedly murdered his own daughter last week in Meiran area of Ijaye, Lagos has been arrested by the police.

The senior customs officer was alleged to have killed his 17-year-old daughter last Friday after which he reportedly beat his wife to a state of coma.

Some landlords in Olajide Byron Way, Ojokoro Ijaye, who reported the case to the police, alleged that the man beat his daughter (a medical student of the University of Benin) to death last Friday night and hurriedly buried her in his compound.

When his estranged wife (the mother of the girl) alleg­edly came to challenge him over the shocking death, he was said to have beaten her to a pulp and then took her to an unknown place.

Police arrested him and his younger brother at his house Wednesday afternoon.

The suspect who claimed innocence said his daughter died of food poisoning.

Narrating how the death oc­curred, the suspect said the girl just started vomiting blood af­ter eating food given to her by the new wife he married about two months ago.

“I called my family doctor to do autopsy for the corpse but he said only government hospital can do that. And as a Muslim, I had to bury her on time. So, I buried her the following morn­ing inside my house,” the suspect said.